HOOVER – Authorities arrested a Calera man in connection with a burglary Dec. 16 in the Greystone Parc subdivision, but are seeking the public’s help in identifying two more suspects who fled from the scene and remain at-large. 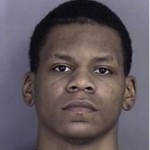 Deonte Cortez McCary, 20, was charged with third-degree burglary and first-degree theft of property. He was being held in the Hoover City Jail on a $45,000 bond and was supposed to be transferred to the Shelby County Jail on Dec. 17, according to a Hoover Police Department press release.

Three suspects, including McCary, ran from the scene shortly before Hoover patrol officers arrived, the release read. Shelby County Sheriff’s deputies who were assisting Hoover officers apprehended McCary as he attempted to escape.

Anyone with information regarding the at-large suspects is urged to contact Sgt. Clint Blackmon at 444-7582.

Crime Stoppers offers cash rewards up to $5,000 for information that solves crimes and leads to offenders being charged or arrested.