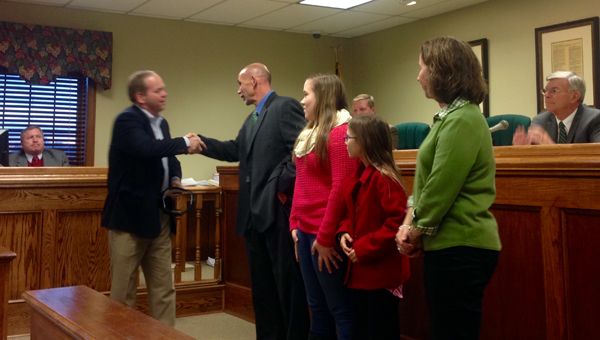 Under Causey, the Demopolis Tigers recorded an 8-3 record and captured the Class 5A regional championships this past season. In his eight season with the Tigers, Causey compiled a 67-29 record and a Class 5A state championship victory in 2009.

“That’s what we were looking for in a coach, someone who had the ‘it factor,’ someone who could do it all,” Pelham City Schools Superintendent Dr. Scott Coefield said.

Causey was chosen after an extensive interview process that included PCS officials, members of the Pelham community and city government officials.

PCS Athletic Director Kim Kiel said Causey’s “passion for young people and the game” made it evident from the start that he was the man for the job.

“He definitely has that ‘it factor,’ I had that feeing (that) he’s the one,” Kiel said. “It’s a great time for the community, for the city and for the Pelham City School System.”

Causey expressed excitement about the opportunity lead the Pelham Panthers.

“The vision for us is to be great,” Causey said. “I’m looking forward to the challenge of getting there.”

Causey said he and his wife are also looking forward to raising their two daughters in Pelham, noting the “total community” feel drew him to the city.

“We’re really excited to be here. This is great and we can’t wait to get started,” Causey said to the sea of green and gold that filled the Pelham City Council Chambers. “This is what I do. I don’t have hobbies, I coach football.”

Causey will take over as the head coach of the Pelham Panthers after former head coach Brett Burnett was terminated after 10 season with the Panthers in early November. Burnett finished his career with a 53-55 all-time record, ending with a 3-7 final season.

By GRAHAM BROOKS / Staff Writer COLUMBIANA–A 42-year-old Shelby man was released from jail on bonds totaling $16,000 after he... read more