COLUMBIANA–A 42-year-old Shelby man was released from jail on bonds totaling $16,000 after he was charged with allegedly fondling an underage victim and indecent exposure. 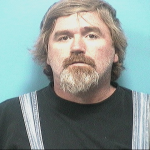 The Shelby County Sheriff’s Office arrested Larry Shane Hatchett on Dec. 14 and charged him with one felony count of sexual abuse of a child younger than 12-years-old and one misdemeanor count of indecent exposure.

The charges came after Hatchett allegedly molested an underage female victim multiple times and exposed himself between 2012 and 2014, according to his arrest warrants.

According to Shelby County Jail records, Hatchett was released from jail on bonds totaling $16,000 the same day he was arrested. He is scheduled to appear in court for a preliminary hearing on Jan. 14, 2015 at 8:30 a.m.

Sexual abuse of a child younger than 12-years-old is a Class B felony, and is punishable by up to 20 years in prison upon conviction.

Indecent exposure is a Class A misdemeanor, and is punishable by up to one year in prison upon conviction.