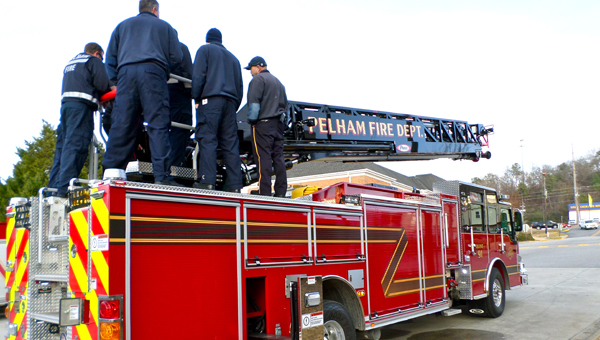 Marshall Brooks, a technician with fire truck company Pierce Manufacturing, came to Pelham from Appleton, Wis., to lead six courses, covering everything from the truck’s computerized dashboard monitor to the 360-degree rotating ladder.

“Every truck you get is different. This training is directed specifically for this truck,” Pelham Fire Department Battalion Chief Don Green said. “It’s not like anything else that we have, except that it’s red.”

Green explained the quint truck is more than “just a standard” fire truck. It can pump water at 1,500 gallons per minute, has a 75-foot ladder fitted with aerial water stream capabilities and is equipped with “advanced life support medical equipment.”

The truck will also be fitted with the latest Scott Air-Paks with a tracking system to monitor how long a firefighter has been inside a fire and how much air they have, and a homing device to find a firefighter if necessary.

“There were a lot of safety considerations put into that design,” Green said, noting every tool and piece of equipment stored in the truck is “secured.”

Firefighters also learned how to read various indicators on the truck and troubleshoot any situations that may arise in the field.

“If there’s something wrong, you don’t have to wonder about it, it will tell you,” Green said. “It tells you what’s wrong and where it’s wrong.”

In addition to learning the basics of the truck, firefighters were also able to experiment with and customize the truck during training.

The new quint truck arrived in Pelham in November after making the more than 800-mile drive from Wisconsin. It is replacing the department’s former 1995-model truck and will be permanently housed at Fire Station 1, behind City Hall.