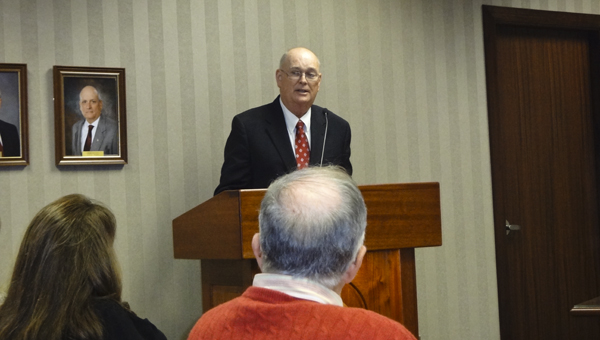 HOOVER – The Hoover City Board of Education appointed Dr. Jim Reese as the interim superintendent for Hoover City Schools at a called board meeting Dec. 19 at 1:30 p.m.

Reese retired three years ago after serving as superintendent in Enterprise for nine years.

“If I had a choice of a school system–anywhere, not just Alabama, but anywhere–it would be this one,” Reese said during the meeting. “It will be a pleasure for me to work for you and with you, and I am just excited about accepting this opportunity and being a part of the Hoover City School System.”

Reese was the leader of the Enterprise school system when a tornado swept through the city March 1, 2007, devastating two schools and killing eight students.

“I’ve never been through anything like that before as a superintendent, but I think it made me not only a better superintendent but a better person,” Reese said. “There’s not a day that goes by that I don’t think about those students we lost and the families who lost those children.”

Reese’s appointment as Hoover’s interim superintendent is effective Jan. 1, 2015, and he can serve up to 180 days.

In the meantime, the board will continue efforts to find a permanent replacement for Andy Craig, whose time as Hoover City Schools Superintendent will end Dec. 31.

Craig resigned Dec. 5 to accept a position with the Alabama State Department of Education as deputy state superintendent of administration and finance starting Jan. 1.

After accepting Craig’s resignation at a regular meeting Dec. 8, the board officially launched its search for a temporary and a permanent replacement.

Board President Donna Frazier said the interim position needed to be filled before Jan. 1 in order to maintain a constant level of leadership from one year to the next.

Frazier asked board member Earl Cooper to spearhead the search for an interim superintendent and put together a list of potential candidates to discuss at a called meeting Dec. 19.

“In order to find the most experienced and esteemed education leader, who met the board’s stated criteria for the position of interim superintendent, I contacted a multitude of sources–informed people at the State Department of Education, Alabama Association of School Boards, CLAS, other knowledgeable educators and community leaders,” Cooper wrote in a report. “Ultimately our goal was to find someone the board felt would be the best available person to meet the current leadership needs of the district and someone who would sustain our momentum and reputation as a leading school district.”

Reese was the only candidate Cooper presented to the board Dec. 19.

“Dr. Reese is very much respected as a leader in education with demonstrated unquestionable values and a strong focus on schools and the community,” Cooper said in a press release. “He’s seen the highs, and he’s seen the lows.”

A PHS junior and trombone player in the PHS band, Aaron Wilkes was selected to the 2014-2015 All-State Gold Jazz... read more