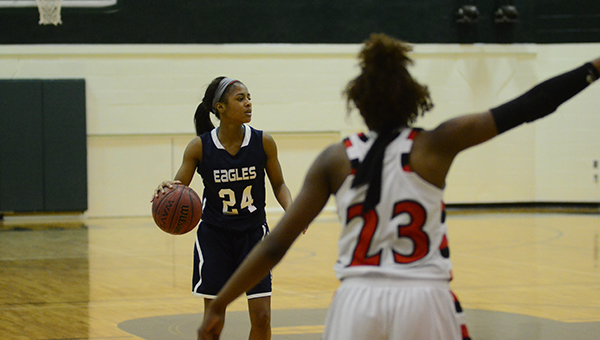 The championship game saw the Lady Warriors lead the majority of the game until a stellar fourth quarter performance that gave the Lady Eagles a six point victory and tournament champions.

Things started to look bleak for the Lady Eagles at one point in the third quarter when Thompson stole the ball on back-to-back possessions and scored to stretch their lead to 23-17.

Oak Mountain Head Coach Allen McGowan called a time out and discussed how his team was able to turn the game around from that point on.

“We thought they just hurried us up in that period of time,” said McGowan. “We kind of got out of what we were doing and started to get frustrated and the timeout really just helped us kind of regroup really.”

Oak Mountain began to settle down but still trailed 28-24 at the end of the third quarter.

The fourth quarter then belonged to the Lady Eagles as they continued to come up with big shots and make stops on defense. Oak Mountain outscored Thompson 16-6 in the final quarter to take the victory.

Sims of Oak Mountain led her team with nine points in the game.

“It was a big win for us,” said McGowan. “It was the best team we played and probably the best team we’ve won against this year and it helps us going into the holidays.”

Oak Mountain improved their record to 8-4 on the year and defeated Briarwood, Calera and Thompson to take the Shelby County Tournament Championship.

William Laatsch and his father Chris Laatsch met on the basketball court where they talked about the experience of playing... read more