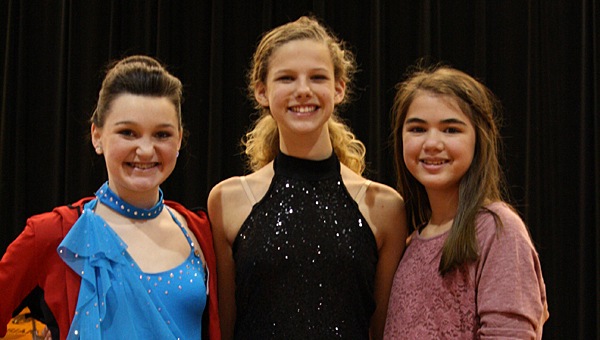 ALABASTER – At Thompson Middle School, the atmosphere was celebratory on Friday, Dec. 19, and not just because it was the last day of school before the beginning of the holiday break. The day also marked the first student-led talent show held in the gymnasium.

“(The students) approached us about doing a talent show and made a good case. We told them if they wanted to do it they had to run it,” said TMS Principal Neely Woodley.

The students stepped up and, along with the help of Assistant Principal Desaree Jackson, organized the event from beginning to end. For two weeks the group held auditions to chose acts for the show. More than 50 students auditioned for the program, but only 17 acts made the final cut.

“I really like getting a chance to see other talents besides what they show everyday in the classroom,” said Jackson.

TMS students London Wooley and Chaney Johnson also acted as emcees during the show, introducing the acts and keeping the show on schedule.

The students performed a wide variety of talents including a duo who sang “Acappella” by Karmen, the TMS drum line and brass who played an instrumental piece, as well as gymnasts, dancers and baton-twirlers who performed acts choreographed to music.

Each student who chose to attend the talent show paid a $2 entry fee, and the money raised will go towards to the school’s general fund to buy supplies and other things necessary for the students.

Though this was one of the first student talent shows held at TMS, it will most definitely not be the last, Jackson said.

“We just felt like it was a way to end our semester on a great note,” Jackson said.