COLUMBIANA–Former Jefferson State Community College President Dr. Judy M. Merritt touched many lives before her passing on Oct. 19, 2014, and a stretch of roadway near Jeff State’s Hoover Campus will be renamed in her honor. 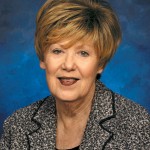 Dr. Judy Merritt was honored on Tuesday, Dec. 9 after her passing in October when the Dr. Judy M. Merritt Memorial Highway resolution was passed in her remembrance. (File)

The resolution was announced by the Shelby County Commission and was unanimously approved on Dec. 9.

“The biggest heartache for me personally knowing her and how she operated, is that we were not able to do this while she was still alive,” Shelby County Manager Alex Dudchock said at the commission meeting.

During Merritt’s 35-year tenure at Jefferson State Junior College, later named Jefferson State Community College, she presided over unprecedented growth of the college and expanded the college’s reach to a campus in Shelby County according to the commission’s resolution.

The resolution also stated that when the Hoover Campus on Valleydale Road opened in January 1993, it had an initial goal to serve 500 students. Now there are three classroom facilities serving 5,000 students in Shelby County, as of fall semester 2014, and Jefferson State Community College serves a total of 10,992 students.