Salvation Army ‘Down tremendously’ in donations 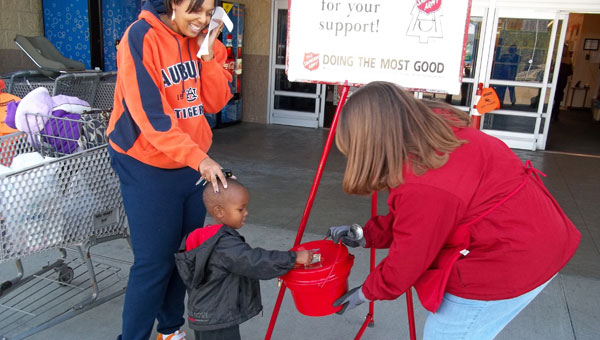 The Salvation Army of Chilton and Shelby counties is looking to overcome a significant fundraising deficit before Christmas. (File)

ALABASTER – The Salvation Army of Chilton and Shelby counties is hoping to avoid cuts to local charitable organizations by overcoming a significant fundraising deficit over the next few days.

As of Dec. 19, the Salvation Army was down $16,000 compared to last year’s Christmas fundraising efforts, and was $35,000 away from its goal for the campaign. If the campaign is unsuccessful, the organization may have to cut back on the number of local families it helps throughout the year.

“We have today through the 24th to make up these deficits, and if we can’t there will have to be some cuts that we have to make through the year,” Salvation Army Lt. Brian Leonard wrote in an email. “If we end $16,000 down at the end of the year, that is possibly over 200 cases that we might have not seen this year because of the shortage of our goal.”

The Christmas campaign, during which the Salvation Army sets up donation kettles at locations throughout the community, is one of the organization’s largest fundraisers each year. All money donated to the campaign “means hope for people that are in need of help throughout our community,” Leonard said.

To donate, visit a local kettle donation location, visit The Salvation Army office at 108 Plaza Circle in Alabaster or email Leonard at jamie_leonard@uss.salvationarmy.org.