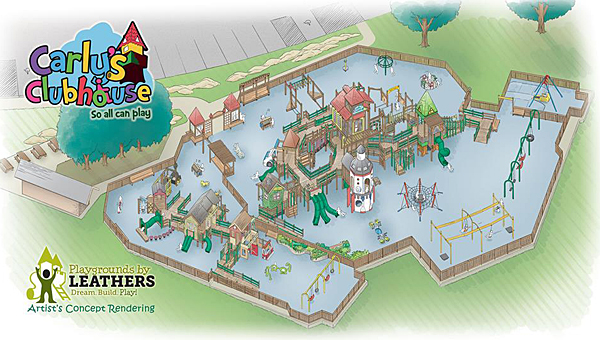 The Leathers and Associates firm recently completed a 3D rendering of the Carly’s Clubhouse playground, revealing a zipline, rocket ship and more. (Contributed)

PELHAM – For Dustin Chandler, a Pelham police officer and the driving force behind Carly’s Clubhouse, seeing the 3D artist’s concept rendering of the all-inclusive playground was a special moment.

“It’s an exciting feeling knowing that will be more than likely what the playground will look like,” Chandler said.

The drawing, designed by Leathers and Associates, is the product of input from more than 1,000 children and community members. The design includes a zip line, a merry-go-round, a rocket ship with working lights, a tot area for smaller children, a rock climbing wall, and Liberty Swings, a special swing for children in wheelchairs.

The playground will be roughly 30,000 square feet, Chandler said, and will cost approximately $800,000. Fundraising is under way, and supporters have donated close to $30,000 in the past several months.

Not only will the money for the playground come from the community, but the construction of the playground will be by volunteers as well, with professional oversight.

“The community is putting this together,” Chandler said. “Literally, the nuts and bolts will be put together by you and me.”

More exciting events are ahead for Carly’s Clubhouse. The non-profit organization was selected to be in a parade following Governor Robert Bentley’s inauguration on Jan. 19. In addition, the organization is holding a concert featuring Elvis, Aretha Franklin and Gladys Knight impersonators at the Pelham Civic Complex on Jan. 24 at 7 p.m.

To make a donation or learn more about the upcoming events, email Dustin Chandler at dustinchandler174@gmail.com.