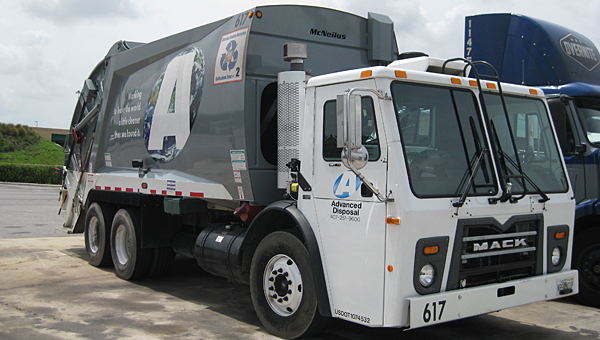 ALABASTER – No longer will Alabaster residents have to remember if it’s their week for recycling or not, as the city’s new garbage company will begin offering recycling pickup every week beginning on Jan. 7.

During its Nov. 24 meeting, the Alabaster City Council voted to award the city’s residential recycling bid to Advanced Disposal, which will charge $11.23 per month to collect residential garbage and recycling each week.

The company also will collect garbage and recycling at Alabaster City School System facilities for $2,500 per month.

This will mark the first time Alabaster residents will have weekly curbside recycling, as the city’s current garbage provider collects recycling every other week on a staggered basis.

“I have heard a couple of people say that they have trouble remembering if it’s their week for recycling,” Alabaster Mayor Marty Handlon said during a Dec. 23 phone interview. “Now, they can put their recycling out every Wednesday and it will get picked up.”

Residents are encouraged to place their garbage and recycling containers on the curb by 6:30 a.m. on their collection days.

Allied Waste, the city’s current provider, will begin collecting its bins on Dec. 29, and is asking residents to place their old bins by the curb for collection.

For issues dealing with garbage or recycling, you may contact the City of Alabaster at 205-664-6800 or by using the “Report a concern” form on Cityofalabaster.com.