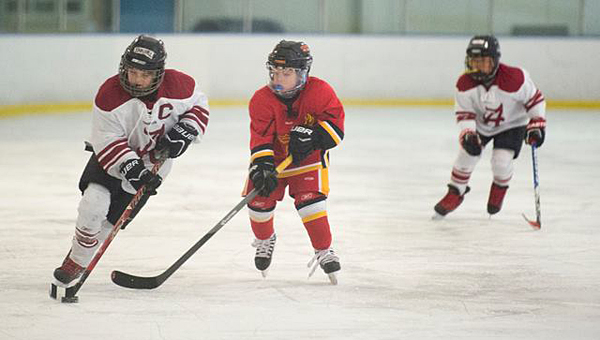 The Junior Frozen Tide, which is based at the Pelham Civic Complex and Ice Arena, recently finished a successful season. (Contributed)

PELHAM – The Junior Frozen Tide, a travel hockey program based out of the Pelham Civic Complex and Ice Arena, has experienced a very successful year.

Over Thanksgiving weekend, four of the five age groups the program offers went to tournaments around the country, with three out of the four teams winning first place, and one team winning third place.

Randy Murphy, director of hockey for the Pelham Civic Complex and Ice Arena, said the goal set for 2014 was to grow the program.

“We’ve grown,” Murphy said. “It’s been a good year in terms of growth for our program. It’s been an exciting year for the program.”

Currently, the travel team has approximately 15 players per team per level, and approximately 70 players in the program as a whole.

The complex offers a number of other hockey programs, including the Pelham Youth Hockey League and several adult hockey leagues and one “pick-up game” each week.

“We have something for everyone,” Murphy said.

At every level, Murphy said coaches emphasize both having fun with the game and honing skills.

“We want to make sure kids are having fun while working on skills,” Murphy said.

Going forward, Murphy said the program is looking to keep giving kids a quality hockey experience, and encourage all players to do their best.

“Currently, we’re looking to make all hockey just a better environment for the kids,” Murphy said. “We want our players to become the best players they can be.”