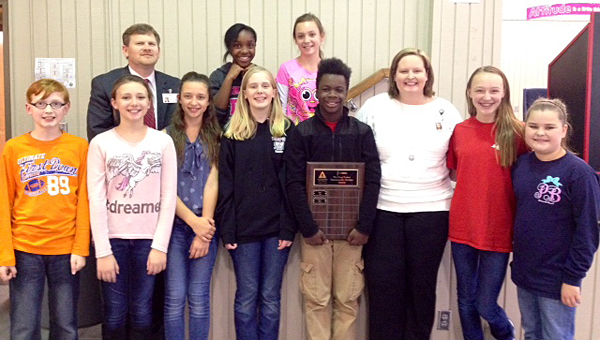 ALABASTER – Over the month of November, students in Alabaster’s schools had no problem making sure locals in need are cared for during the holiday season and beyond, as they smashed their own food drive record from last year.

From Nov. 3-21 the city’s schools collected canned food goods to donate to local charities, such as the Salvation Army, Manna Ministries, First Baptist Church of Alabaster and the Jimmie Hale Mission.

Throughout the month, the city’s schools hosted a friendly competition in a race to collect the most cans. School administrators used incentives of all kinds – such as promising to kiss a pig or be pied in the face – if their students collected the most canned food goods.

At the end of the month, the Thompson Sixth Grade Center captured the Doug Trotter Community Spirit Award for the most cans collected for the second consecutive year.

“TSGC was the winner with 5,269 items donated. This total accounts for about 11.5 items per student!” ACS Student Services Coordinator Dorann Tanner wrote in an email.

Trotter was a beloved teacher in the Alabaster community and passed away suddenly in 2012. To honor and celebrate his legacy, ACS began hosting an annual can food drive for local charities in 2013.

With the help of TSGC’s impressive showing, ACS was able to collect a total of 12,754 items during the monthlong drive, which was up more than 1,000 from last year’s drive.

“It is such a wonderful way to honor a beloved member of the community,” Tanner wrote.