PELHAM – A 19-year-old Pelham man has been released from the Shelby County Jail on bonds totaling $30,000 after he was charged with allegedly dealing drugs on three occasions in Pelham over the past several months. 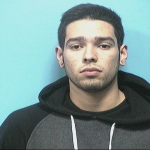 The Shelby County Drug Enforcement Task Force arrested Armando Simental Quintana, who lists an address in the 1200 block of David Drive, on Dec. 18 and charged him with three felony counts of distribution of a controlled substance.

He was released from jail after posting bonds on Dec. 21, according to Shelby County Jail records.

According to his arrest warrants, Quintana allegedly distributed marijuana in the 500 block of Cahaba Valley Road in Pelham on March 6 and in the 3100 block of Pelham Parkway on Feb. 27 and March 5.

He is scheduled to appear at the Shelby County Courthouse on Jan. 15 for a preliminary hearing at 8:30 a.m.

Unlawful distribution of a controlled substance is a Class B felony. If convicted, Quintana could face up to 20 years in prison per charge.