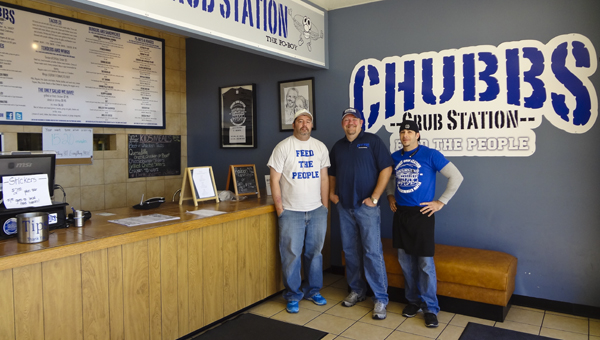 The Chubb’s Grub Station restaurants in Alabaster and Chelsea will compete with an Ohio restaurant in honor of the Sugar Bowl on Jan. 1. (File)

ALABASTER – The Chubb’s Grub Station restaurants in Alabaster and Chelsea will put their popularity to the test on New Year’s Day as it looks to prove Alabama fans support their team and community more than Ohio State fans.

O’Donold’s Irish Pub in Youngstown, Ohio, issued a “burger vs. burger sell-off” challenge to Chubb’s on Dec. 28 to pit the two college football fan bases’ loyalties on the day of the Sugar Bowl between Alabama and Ohio State.

Throughout the day on Jan. 1, Chubb’s will sell its Sugar Bowl Bama burger and O’Donold’s will sell the Buckeye burger as each attempts to outsell the other.

The Bama burger will be a twist on Chubb’s “Juicy Lucy” burger, and will feature grilled pineapples, homemade sloppy Joe sauce, cheese, bacon, fried jalapenos and a side of fries.

Because the two restaurants organized the challenge only a few days before the game, they decided to let the contest winner be decided on the football field, said Chubb’s owner Will Cholewenski.

“We didn’t have enough time to be able to accurately track who sells the most burgers that day, so the winner will be determined on the football field,” Cholewenski said during a Dec. 29 interview. “It’s just a friendly wager.”

However, Cholewinski said he is planning to donate a portion of his daily sales to Manna Ministries and the First Baptist Church of Alabaster’s food pantry regardless of the outcome of the football game.

“That will include all burger sales that day from both of our locations,” Cholewinski said.

The Alabaster Chubb’s Grub Station is located at 410 First St. SW, and the Chelsea location is next to the BP gas station on U.S. 280 across from the Winn-Dixie supermarket.

Several police and Sheriff’s Office vehicles chase a suspect’s vehicle near the intersection of Alabama 119 and U.S. 31 in... read more