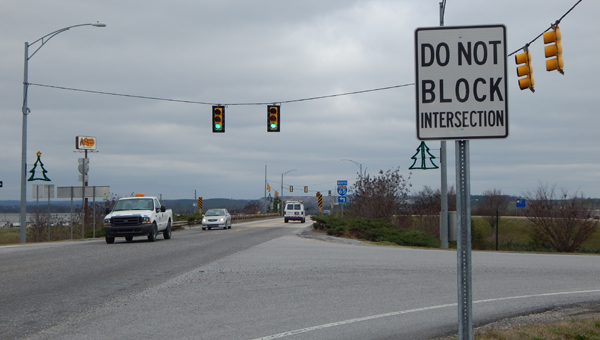 Engineers are in the final stages of preparing to widen an interstate overpass on U.S. 31 in Calera, according to Calera Mayor Jon Graham. (Reporter Photo/Jon Harrison)

Plans to renovate the bridge on U.S. 31 over Interstate 65 at exit 231 in Calera are now 90 percent complete and city officials hope to see groundbreaking in the fall of 2015.

“We have had what you call a 90 percent plan in hand meeting already,” said Calera Mayor John Graham “Which means the engineers and architects that are working on the project are within 10 percent of completing the plans.”

“The next step in the lengthy process is for the renovation plans to be approved by the state and then the right of way must be acquired,” Graham said.

This means any land that is privately owned that will be affected by the renovation of the bridge must be bought. This step must take place because the renovations will include widening the road from two lanes to six lanes.

Once the right of way is acquired, utility relocation will be next.

“This can be a lengthy, difficult process, depending on how much relocating is actually required,” Graham said.

The relocation of power, water, sewer and city gas are all utilities that are included in the relocation.

After these steps are completed, the bidding will open to contractors, said Graham. The bridge is currently still a two-lane road that causes significant congestion during rush hour and holidays.

The plans to renovate the bridge were announced in July of 2013 by Governor Robert Bentley. The entire project will cost an estimated $10 million, $8 million of that is being funded by the Alabama Transportation Rehabilitation and Improvement Program, and the other $2 million by the city of Calera. Graham originally said he hoped the renovation would begin within 18 months of the initial announcement.

Dr. Mike Mahan will present his book, “No Hill Too High for a Stepper: Memories of Montevallo, Alabama,” at the... read more