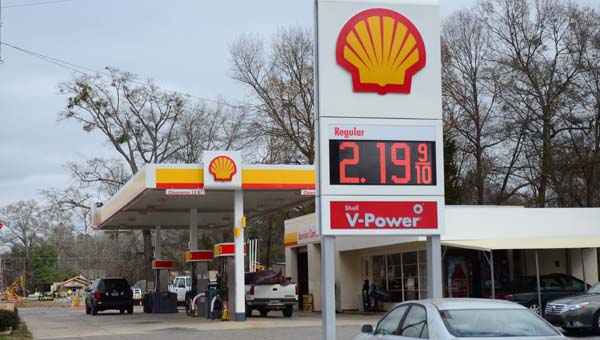 Gas stations, like this one in Wilsonville, have seen a decrease in the price of gas in the last six months. (Reporter Photo/ Baker Ellis)

Since July, gas prices have dropped from an average of $3.69 across the country to the $2.63 average seen in December, as reported by the US Energy Information Administration. Prices in central Alabama have dipped even lower still, falling below $2.10, and in some cases even below $2, which is drawing praise from local drivers.

There are a number of factors that have contributed to the gas decline of the past six months. The United States has found increasing amounts of oil in places such as Texas and Oklahoma, driving the need to import from overseas down considerably. David Harcourt of Hoover is happy the gas prices are down, but wants to see the price of diesel decrease as well.

“It’s interesting, because diesel hasn’t gone down at the same rate as unleaded gas.” said Harcourt, “They aren’t taxed the same, so I know that plays into it. But when oil is sitting at $54.30 a barrel coming out of the Middle East compared to over $100 a barrel back in the summer, that’s great news for us.”

Shane Miskelly of Wilsonville said he hopes the lower gas prices are here to stay. “If we want to fix this country, just leave gas prices at $1.99 for four years and all these problems will correct themselves.”

Miskelly, a homebuilder, has often seen couples struggle to make ends meet due to the high gas prices. “You’ve got people living around here commuting into Birmingham to work. They’ve got to pay their house payment, childcare, and still get back and forth to work when gas is so expensive. If gas stays this low long-term, you’ll see a lot of problems go away.”

From Columbiana to Harpersville the reaction to the low gas prices was positive, yet also slightly tentative, as many people were encouraged but also hesitant to believe they would stay this low.

“As long as they stay here,” said Greg Smith, passing through from Mississippi.

Time will tell if the trend continues.