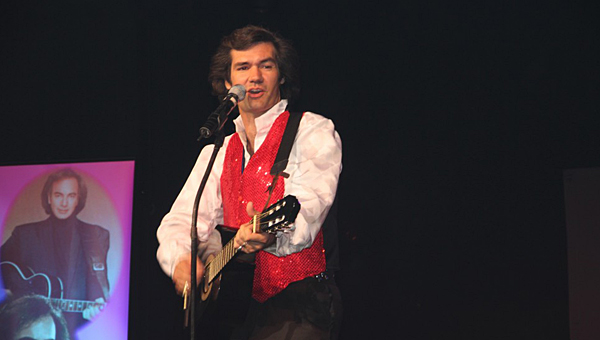 Keith Allyn, who impersonates Neil Diamond at his theater in Branson., Mo., will perform in Alabaster in early February. (Contributed)

ALABASTER – Neil Diamond fans will be in for a treat in early 2015, as a Branson, Mo., entertainer will perform at Thompson Middle School in February.

Keith Allyn, who performs as a Neil Diamond impersonator from March through December at a theater in Branson, will bring his act to Alabaster for the second time on Sunday, Feb. 8, in the TMS cafeteria. Allyn is a seven-time Branson Show award winner.

Advance tickets are available at the Alabaster Senior Center from Jan. 2 through Jan. 30 for $10, and may be available at the door the day of the event for $15 cash only per ticket. Because the show could sell out ahead of time, day-of ticket sales are not guaranteed.

“He has his own theater in Branson, and he does some shows in Florida when he’s not performing in Branson,” said Alabaster Senior Center Manager Alicia Walters. “As he travels, he looks for shows he can perform along the way.”

Walters said Allyn drew a large crowd when he performed in Alabaster three years ago, and said his impersonation of the famous musician was spot-on.

“He’s a one-man show, and he does a fabulous job,” Walters said. “I was pleasantly surprised how accurate his impersonation was.”

All proceeds from the event will be set aside to support future projects and expansions of the Alabaster Senior Center, Walters said.

“Nothing is concrete yet,” Walters said of plans to expand the Senior Center. “But we’re always hopeful.”

Gas stations, like this one in Wilsonville, have seen a decrease in the price of gas in the last six... read more