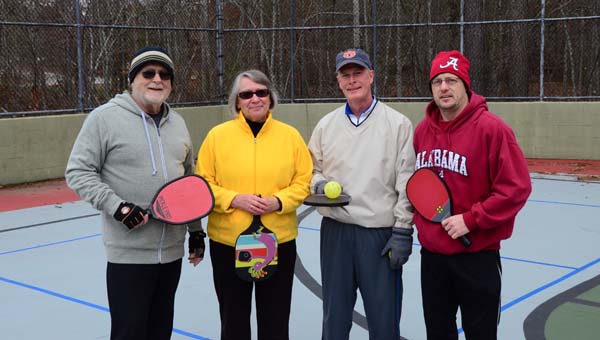 Mt Laurel- On an outdoor basketball court in Mt Laurel, just a few miles off of U.S. 280, there’s something happening. Four people, with a median age hovering around 50, are huddled around a net inside some makeshift lines-of-play whacking what looks eerily similar to a neon yellow whiffle ball from one side to the other. What’s taking place is a sport called pickleball.

Pickleball started in 1965, outside of Seattle, as an alternative sport for bored children to play in the summer when the regular sports weren’t holding their attention. Since its development, the game has exploded across the country, finding a home everywhere from New York to Florida to Oregon.

The game is a combination of volleyball, tennis, and badminton. Usually played in groups of four on a court the same size as a doubles badminton court, pickleball is meant as a social way to raise your heart rate.

Games are played to 11, and scored one point at a time. The paddles look slightly like oversized ping pong paddles, and teams can only score while serving. More rules can be found at the national pickleball website, Usapa.org.

Neill Beavers, local pickleball enthusiast and Birmingham patron of the game, has brought the sport to the local market and is trying to raise awareness for the game.

“I learned to play in Kalamazoo, Michigan.” Said Beavers, “That place is a lot smaller than Birmingham, and there had nine separate places to play pickleball in the city.”

Mt Laurel is currently the only option for any potential pickleballers in the Birmingham area to try the game out. They play every Monday, Wednesday and Friday at 10 a.m. on the outdoor basketball courts just past the fire department station in Mt. Laurel.

“It’s such a social game,” Beavers said. “Whereas with tennis or something else, you might need to be invited to play or know someone there or call ahead to reserve a court, that’s not what pickleball is about. Show up at any time, and I promise you’ll be welcome.”

For more information about where and when to play, and how you can get involved, please contact Neill Beavers at his email address, neillbeavers@gmail.com.