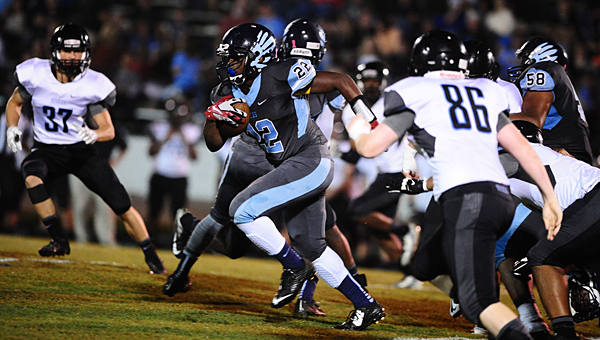 Calera running back Shakeith Tyes set a school record for rushing yards in a single contest with 353 in an Oct. 10 matchup with Helena. (File)

By DREW GRANTHUM/For the Reporter

Filling the shoes of an important leader is a tough task in any endeavor, especially in sports. The void left by a star player that graduates can be huge, and can lead to less than stellar results in the season that follows.

Luckily for the Calera Eagles, the void left by former standout and current University of Alabama football player Ronnie Clark didn’t wreak havoc on their offense. Instead, Clark’s departure simply allowed for another offensive star to burn bright: 2014 Shelby County Reporter Player of the Year for football, Shakeith Tyes.

To say Tyes was an important part of the Eagles’ season is an understatement. The senior running back exploded this season, racking up 2,700 yards rushing and 37 touchdowns over the course of the season, placing him in the Top 20 all-time for touchdowns in a season in history of the Alabama High School Athletic Association.

His 222 points courtesy of touchdowns alone accounted for 43 percent of all Calera points, and paved the way for the Eagles to roll to a 10-2 season, advancing to the second round of the playoffs before an overtime loss at Greenville ended the Eagles’ run.

While Tyes was setting records on the state level, he was also rewriting the Calera record book, notching not only the single-season rushing record, but the career mark for rushing touchdowns with 73.

“Shakeith truly deserves this honor,” he said. “I’ve seen very few backs run with as much determination and effort as he does. His legacy at Calera High School goes far beyond just being a great running back.  Shakeith is a leader in our school and exhibits exemplary  character and conduct on a 24/7 basis.  Shakeith Tyes is a winner, and any college coach in America would consider him a tremendous asset to their program.”

It is his ability to not only step up in the place of a team leader and take over for an outgoing star, but his penchant for taking over a game and leading his team in terms of on field production, as well as nominations from coaches on his team’s staff as well as on others, that has led to his selection for the award.