ALABASTER – A 24-year-old Alabaster woman who was already on probation for a previous trafficking in stolen identities charge is being held in the Shelby County Jail on bonds totaling $210,000 after she allegedly stole multiple victims’ identities over the past several months. 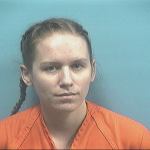 Barashes’ arrest came after she allegedly stole multiple victims’ identities and used them to fraudulently obtain loans and make purchases with the victims’ credit cards.

According to her arrest warrant, Barashes allegedly stole a woman’s identification on Aug. 12 and June 24, used the victim’s debit card to make unauthorized purchases and took out a loan in the woman’s name.

Barashes also allegedly stole two other women’s identifications, and used one of them to obtain a loan in the victim’s name.

When Barashes was arrested on the charges, she was serving a five-year probation sentence for a trafficking in stolen identities charge she pleaded guilty to on June 4.

All of Barashes’ current charges are Class C felonies, according to Alabama law. If convicted, she could face up to 10 years in prison per charge.

Barashes is scheduled to appear in the Shelby County Courthouse on Jan. 28 for a preliminary hearing at 8:30 a.m.