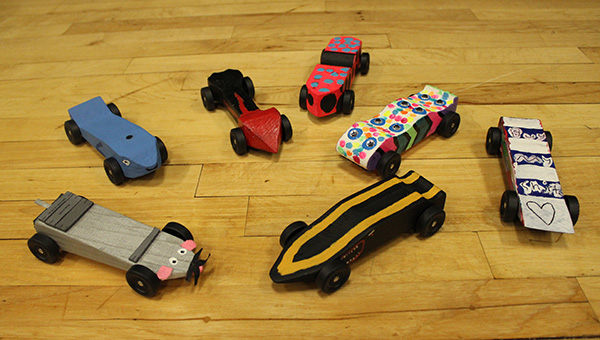 Here are a few of the cars the VMHS students designed and built over the seven-week STEM project. (Contributed)

Students in Partrice Marbry’s eighth grade Pre-AP science class wrapped up a seven-week STEM (science, technology, engineering, and math) project where students did extensive research on the design and construction of derby cars.

The research included learning about scientific terms such as mass, weight, velocity, gravity, motion and energy. The students, who worked in groups, also had to complete calculations based on various formulas in order to reach certain conclusions that might impact the design and construction of their car.

The students worked with the school’s vocational technology teacher, Ted Gipson, to design blueprints of their cars.  During this process, the students also learned about the various careers where blueprints are used.

“While they were in the blueprint phase of the project, the students learned about careers such as architects, engineers, automotive manufacturing and construction, which all use blueprints in the everyday application of the design process,” said Marbry.

One large element of the project was a written thesis paper, in which the students had to clearly express three factors they believed would increase the speed of their car or affect the motion. Those factors could have included elements such as acceleration, momentum and speed, or friction, air resistance and gravity.

“They brainstormed and researched all of these various elements,” explained Marbry. “Once they had picked the three topics to investigate, I challenged them to really think about what that would look like.  If I am trying to reduce friction, then what do I need to do in order to reduce it?”

The students had to present their thesis paper to a panel of three adults, who were all knowledgeable about the subject matter.  The students had to defend why they chose the three elements they felt would make the greatest impact on their car’s design.

After the students had defended their thesis papers, they then had the opportunity to test their theories by actually putting their cars on the track to race.

The two winning cars from each of the classes who participated eventually faced each other in a showdown race to see which car was the fastest overall. The winner of the fastest car was the Captain America car. The mouse car earned first place honors for creativity, followed by the sports car in second place.  The winner for best all around was the pencil car.