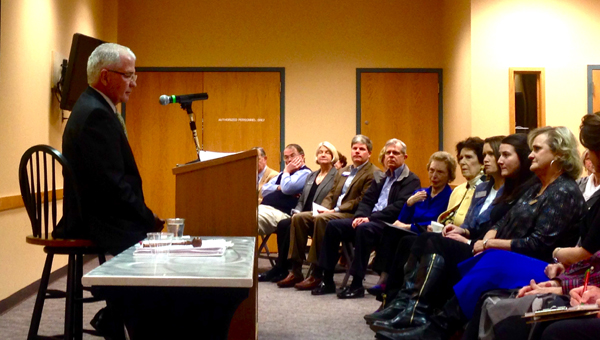 Ivey discussed economic development, safety and plans for the future during the meeting sponsored by the Friends of Hoover Library.

Hoover recently received an AAA credit rating from New York City-based financial services firm Standard and Poor’s, the rating is the “highest a city can get,” Ivey said.

“The city is fiscally sound and has been for the past 10 years,” Ivey said, noting the city approved a more than $100 million budget for the 2015 fiscal year.

Ivey also noted Hoover’s high quality of life and improved safety over the past year.

“We were announced to be one of the top 30 cities in the country to live in,” Ivey said, adding “our crimes are, for the most part, down.”

Throughout 2014, the city saw continued economic development and the opening of numerous new restaurants and businesses.

“There’s been so much opening this year,” Ivey said. “We’ve been so blessed with new businesses.”

Ivey highlighted several new free-standing emergency rooms coming to the city, including one run by Brookwood Medical Center to be constructed at the intersection of Alabama 119 and U.S. 280, which Ivey said is expected to serve 21,000 patients in its first year alone.

“That’s going to be huge for public safety and convenience,” Ivey said. “We’re excited about that.”

Residents will also see road improvements in 2015. A project to resurface Hugh Daniel Drive in Hoover’s Greystone neighborhood is projected to begin this spring, Ivey confirmed.

“We feel like it’s been a great year in the city,” Ivey said. “We think we’ve got a great city to live in and I’m excited to be a part of it.”