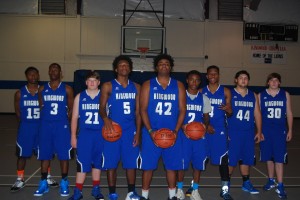 The Kingwood Christian School basketball team swept the Morgan Pepsi Classic Tournament this past weekend, and now stands at 13-2. (Contributed)

Alabaster- The Kingwood Christian School boys’ basketball team participated in the Morgan Pepsi Classic on Jan. 2-3, winning all three of their contests. This event came on the heels of the Lakeside Shoemaker/ Ward Christmas Invitational, which took place in Eufaula on Dec. 29-30 and culminated with a Lion win. On their way to their tournament victory, they beat previously undefeated Success Unlimited Academy in the process. Reggie Mann was named the MVP of the tournament, while Justin Gibson was named to the all-tournament team. The Lions’ record now stands at an impressive 13-2.

In the Morgan Pepsi Classic, Kingwood beat Southern Academy on the first day of action by a score of 73-57. On the second day of the tournament, KCS defeated Marengo Academy 61-53 and Sparta Academy 81-45. Justin Gibson, the Kingwood Christian point guard, scored 63 total points over the three games was named to the all-tournament team.

Kingwood Christian now turns its attention to Glenwood for their Jan. 9 contest.