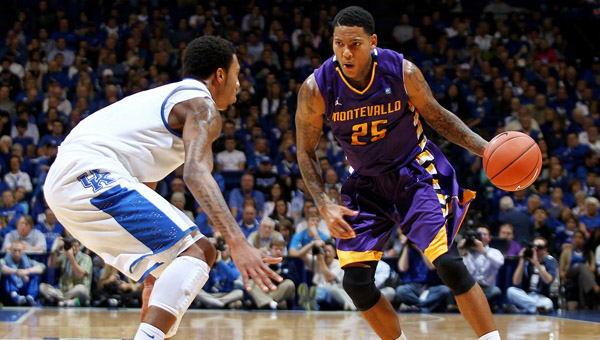 AMERICUS, Ga. – Entering Saturday’s game with Georgia Southwestern, the University of Montevallo men’s basketball team was tied atop the Peach Belt Conference’s West Division with an undefeated conference record. The Falcons used a second half comeback to get past the Hurricanes 67-63, and stay on top of the standings in the process.

Montevallo scored the first six points of the game, holding Georgia Southwestern scoreless until 4:30 had passed.

The Hurricanes recovered from their slow start, relying on solid shooting from three-point territory to do so. Kevin Burnell, Darius Redding, and Deric Rudolph all hit triples for the home team during a 20-6 run that gave GSW an eight point advantage midway through the opening half.

Montevallo was not able to regain the lead in the opening frame, but hung tough behind a balanced attack. Reigning conference Player-of-the-Year Troran Brown led eight Falcons who got on the board, scoring eight points.

After scoring just two points in the first half, Montevallo senior forward Larry Slaughter went off for eight points in just over four minutes to start the second half. Slaughter’s eight points combined with Ryan May’s three-pointer tied the game, 40-40, after an 11-5 run for UM after halftime.

After tying the game up on three separate occasions, Montevallo finally regained the lead with a Brown jumper with 5:59 left in regulation. UM would go on to extend the lead to five points with just minutes to go.

A Damien Leonard three-pointer cut the Falcon lead to just two points with 2:17 to play, but that would be the final basket of the game for GSW, and the Falcons left Americus with a 67-63 win. It was their third straight road win to open up Peach Belt play.

Georgia Southwestern had 15 turnovers in the contest that turned into 18 points for Montevallo. On the other hand, the Falcons had only seven turnovers.

Brown led the way for the Falcons, scoring 22 points while dishing out four assists.

Slaughter had 13 points in the second half and finished with 15 points, shooting 87.5% from the field.

Off the bench, Bryant Orange provided a spark for Montevallo, shooting 50% from the floor and adding eight points.