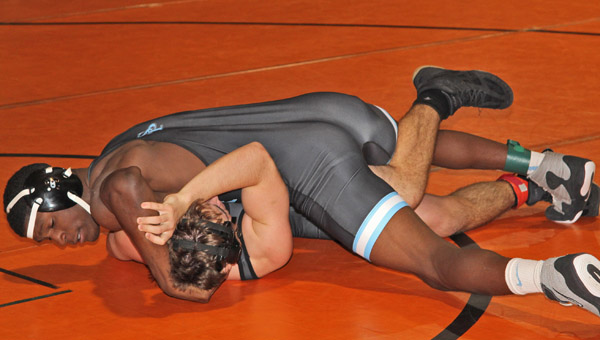 Leon Strong executes a pin on his way to a fourth place finish at the Scott Rohrer Invitational. (Contributed)

The Spain Park Jaguars wrestling team competed in the Scott Rohrer Invitational on Jan. 2 and 3 and had tremendous individual performances from a number of their top wrestlers.

A first place finish by Kevin McClure in the 222-pound weight class highlighted the Jaguars tournament. McClure won every one of his matches by pin, which is the equivalent to a knockout in boxing. McClure, who usually competes in the 197-pound class, bumped up a weight class in this tournament. He defeated previously undefeated wrestler Brett Winters of Hoover High School in the finals.

Leon Strong placed fourth in the 154-pound weight class. Strong had two pins on the day on his way to his fourth place finish. Taylor Cox placed eighth in the 222-pound class as well to round out the top 10 finishes for Spain Park at the tournament.