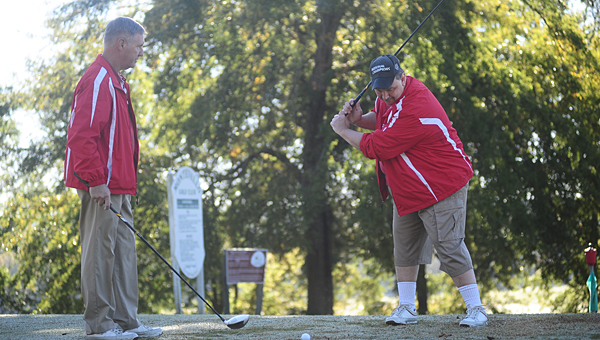 By DREW GRANTHUM / Special to the Reporter

The ultimate goal of any athlete is to be the best in whatever sporting endeavor they choose to pursue. Athletes sacrifice time, money and other engagements in order to spend time training to shave a tenth of a second or to help boost performance in the clutch. Being the best in the world isn’t easy, but if you have the drive and the dream, it’s worth every second of hard work.

Just ask Columbiana’s Mario Youngblood or Alabaster’s Rusty Montgomery. The two athletes have traveled very different roads as far as sporting endeavors. For Mario, track and field competitions are his specialty, whereas Rusty is a fantastic bowler and golfer. The two men have taken very different paths to arrive at the same destination: Gold medal winner at the Special Olympics.

Each captured a gold medal at the 2014 Special Olympics, held in Princeton, N.J., with Youngblood taking gold in the 4×100 relay as well as the high jump and managed a bronze in the 100-meter dash. Montgomery paired with partner David Litton to take a gold in the Level 2 Alternate Shot Team Play golf tournament. For each, getting to the top of their respective sport wasn’t easy, but the road to gold has taken them to heights they never even dreamed about.

For Rusty Montgomery, winning just seems to come as second nature. The Alabaster native has had experience competing at the Special Olympics, albeit it as part of the Shelby County Unified Bowlers team. It was through this team that Rusty was able to meet and get to know David Litton.
Litton, whose wife, Gay, is the director of Shelby County Special Olympics, said the two of them decided to try a new endeavor: Golf.

Litton, who professes to not be a golf pro, said Montgomery has learned the game in a short time.

“He’s done well,” he said. “I’m not a great golfer, (but) we have managed to play well together. I took him out (to) try to teach the fundamentals. He’s come along pretty well.”
Litton said Montgomery studied the game, taking in tournaments on TV to help better understand the game. After time, the duo began playing alternating-shot golf, where they split up a hole by swapping out which golfer shoots after each shot.
“I think he watched it enough,” Litton said. “When we first started, we played nine holes. We shot in the mid-to-upper 60s. Now, we usually shoot in the mid-to-low 50s.”

In time, the two began testing the waters through tournaments, such as the one at Iowa State University in Ames, Iowa, before taking on the Special Olympics Alabama state tournament.

From there, Litton and Montgomery took on all comers, using a strong showing on the second day of the tournament to solidify a gold medal.

For Litton, winning was rewarding, but it didn’t quite measure up to the ultimate goal of seeing Rusty and his family celebrate.

“I can’t tell you how rewarding it was to see his face,” he said. “Not only his face, but his parents. They get so excited.”

“His self-confidence, it’s amazing what (the Special Olympics have) done for him,” he said.

Rusty, 43, struggled with getting out and meeting new people, Don said. It was only after picking up bowling in 1997 and subsequent involvement with Special Olympics that Rusty began to show others his personality.

“When he first started bowling, he was so shy he would not look you in the eye,” Don said.

Slowly, though, Rusty began to be more comfortable in himself and his ability to bowl. When Litton and Rusty started golf, Don said, it elevated Rusty’s social skills.

“It’s good for him mentally and physical,” he said. “There’s no way to describe that joy. It’s a tremendous amount of pride and gratitude (from us) that he’s found that niche.”
Similarly, Mario Youngblood has become quite the symbol of pride for his hometown of Columbiana. From his bright, warm smile to his effervescent and kind-hearted nature, Youngblood has served as quite the ambassador for the county seat.

Youngblood took the gold in the high jump and the relay, with each victory coming with a story of perseverance.

In the high jump, the opportunity for gold came down between Youngblood and another competitor. While the young man gave it his best, Youngblood simply out jumped him down the stretch to take home the gold.

“I was happy, (but) I was trying not to show it, because the kid looked kind of sad,” Youngblood said in a July 2014 interview, shortly after he returned from competition. “I was really happy, but I felt bad for him. He jumped his heart out, and he competed with me.”

Where all of Youngblood’s hard work paid off was in the 4×100 relay. With only a short distance remaining in the race, Youngblood found himself trailing first place by only a few feet.

Summoning all of his strength, Youngblood began to reel in the first place contestant. With only a few meters remaining, He pulled ahead, capturing the race win — and his second gold medal of the 2014 games.

While proud of the accomplishment, Youngblood said the most important part of succeeding on a national stage to him was representing his hometown and his alma mater, Shelby County High.

“It just feels good to do something good for the school,” he said in an Oct. 2014 interview. “It made me feel good. I felt like I did something for Alabama.”

Not only does Youngblood take his hometown with him on his travels, he bases all of his training out of Columbiana.

“I go down to the (Elvin Hill) track,” he said. “Basically, I practice for the event I’m entering.”
With SCHS teacher Marisol Walker keeping track of his lap times, Youngblood worked at each of the four events he was entered until time to depart for Princeton.

Once he embarked on his journey, Youngblood was on his own — literally. No one from Shelby County went with him, as he was the only member of the team from the area.

Despite never having been to New Jersey before — or even an airplane, for that matter — Youngblood took to the track like a seasoned veteran, bringing the two gold medals back home for all of Coulmbiana to see.
After all, Youngblood said, it was the support of the town that got him on that stage.