Bulldogs pick up win against Calera 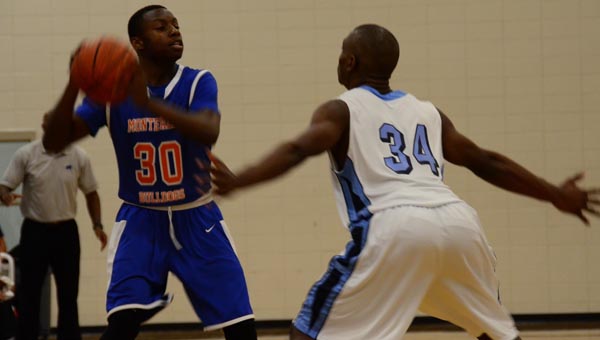 Calera- The Montevallo Bulldogs were able to go into a hostile road environment and pick up a convincing win against the Calera Eagles. Calera came out firing, with a quick three-pointer from Deonte King to kick off the scoring. Another King bucket followed by a Daejon Young basket from Montevallo made the score 5-2 in favor of the Eagles, but that is about where the good news ended for the home team. Montevallo went on a 16-2 run to end the first quarter, making the score 18-7 in favor of the Bulldogs after one. To highlight the quarter were a pair of Bobby Anderson dunks for Montevallo. One of which was an emphatic alley-oop that Anderson was able to throw down as time expired in the first.

Calera tried to keep things close in the second, with more hot shooting from King and Dylan Brantley, but to no avail. The length and athleticism of the Bulldogs proved to much for the Calera 3-2 zone. Montevallo was in a full court, man-to-man pressure defense for most of the first half, which was able to disrupt what the Eagles tried to do on offense. The score at the half was 33-19 in favor of Montevallo.

Jamal Figueroa and Antwonn Cunningham ran the offense efficiently for the Bulldogs continuing into the third quarter, neither folding under the tight Calera pressure. They were able to extend the lead when King and the Eagles began to eye a run by playing smart and limiting turnovers. Calera was able to score more effectively in the third, scoring seven quick points to start the quarter, but they were unable to stop Montevallo’s offensive output, so were unable to close the gap. The score after three was 48-34 in favor of Montevallo.

The fourth quarter was more of the same. One of the key factors for Montevallo in their victory was their ability to clean up the offensive glass. The size of Anderson was too much for Calera to handle, as he routinely gathered missed shots and put them back up for easy buckets. King and Brantley tried to keep Calera in the game in the fourth, but the Bulldogs never had much trouble putting them away late.

Calera will try to recover from the home loss when they travel to face Helena on Jan. 9.

Maddie Hastings took fourth place in the all-around at the state meet in Mobile from Dec. 5-7. (Contributed) By BAKER... read more