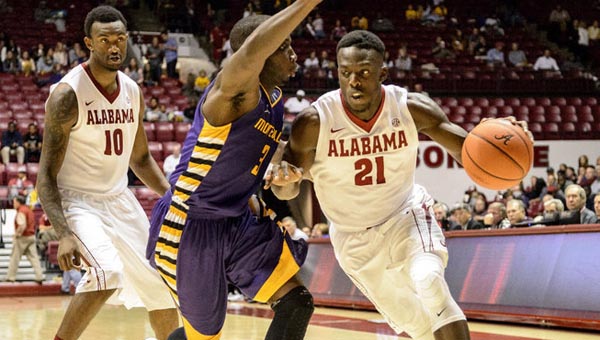 Monetvallo’s Skykeem Jackson, shown here in action against Alabama, helped lead the Jaguars to a victory over Clayton State. (Contributed)

MONTEVALLO, Ala. – For the first time in nearly a month, the University of Montevallo men’s basketball team played a home game on Monday night against the Clayton State University Lakers. For the fourth straight conference game, UM walked away victorious, earning a 71-56 win over the visiting Lakers.

Montevallo had a big first half that was predicated on hot shooting. As a team, the Falcons shot 68.2% from the floor, in addition to going 3-for-5 from beyond the arc.

Seniors Ryan May and Troran Brown scored 15 of the first 17 points of the game for Montevallo.

May was perfect from the field in the first half, making a three-pointer and converting a free throw after fighting through a foul to score from the floor.

Brown made his first four shots, including a three-pointer, and gave the Falcons an early lead that they would never relinquish.

Ibrahim Johnson came off the bench and did not miss a shot; displaying some impressive post moves in the process. In addition to his eight first half points, Johnson also had three rebounds.

At the half, the Lakers trailed the first place Falcons by eight points, 36-28.

In the second half, Montevallo carried over the momentum from the first 20 minutes and continued to expand their lead over the conference foe.

The Falcons continued their consistent shooting in the second half, as they again shot over 50% from the field.

All told, the Falcons defeated the Lakers by the final score of 71-56. Montevallo shot 59.6% from the field overall, while Clayton State shot just 37.5% from the floor and only 25% from three-point distance.

Brown finished with a game-high 22 points on 10-of-13 shooting. He chipped in four assists, while only committing two turnovers and no fouls.

Johnson had the second-most points on the team, scoring 12 off the bench and shooting 75% from the floor. He and senior Larry Slaughter were tied for the team lead in rebounds, grabbing seven boards apiece.

Slaughter had eight points in addition to his seven rebounds, including a resounding dunk after going coast to coast after a steal.

Junior Bryant Orange led the Falcons with six assists in 21 minutes off the bench.

As a team, Montevallo had 22 assists, in comparison to just 8 assists from CSU.

Montevallo (8-6, 4-0) has now won four straight and six of their last seven games.

They will have just a day off until they go for their fifth straight win on Wednesday, January 7, against Georgia College.