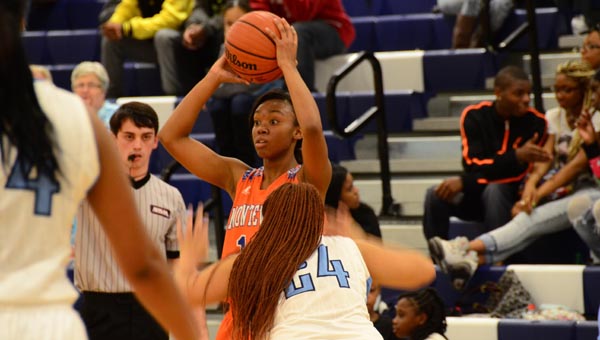 Lauren Lilly of Montevallo looks to pass around Tia McCarter of Calera in Montevallo’s 59-48 win on the road. (Reporter Photo / Baker Ellis)

Calera- In a game highlighted by runs and tight perimeter defense, the Montevallo Lady Bulldogs were able to make a few more plays down the stretch to pull out a road win against the Calera Lady Eagles.

The contest started out very tight, with Calera and Montevallo exchanging early buckets to make the game 2-2. Two quick three’s by Charley Clark and another easy bucket from Tyesha Haynes made the score 10-4 in favor of Calera early on. But Montevallo was able to pull ahead by a single point at the end of the first quarter to make the score 14-13 behind strong guard play from Lauren Lilly and Isabell Gallow.

In the second, the action remained tight as the two teams traded baskets before the scored was tied at 19-19. Montevallo was able to eek out a three-point halftime lead behind a late Lilly three pointer that led the Lady Bulldogs into the break on a high note.

The third quarter was when the game really began to get away from Calera. Montevallo went on a 17-5 run that encompassed the entire third quarter behind big scoring contributions from Lilly and Gallow to make the score 43-28 after three. The Lady Eagles attempted to play tight perimeter defense, applying ample pressure to the ball carrier at the top of the key, however Montevallo was able to break their defense down time and again by finding the weak areas on the floor.

Calera attempted to mount a comeback in the fourth quarter behind some sharpshooting from Clark, Bree Caldwell, and Haynes, but the game was never really in doubt for the Lady Bulldogs after they opened the floodgates in the third quarter. Montevallo leaves the road environment with a win they can be proud of.

Calera now turns its attention to the road, where they will play Helena on Jan. 9.

Bulldogs pick up win against Calera