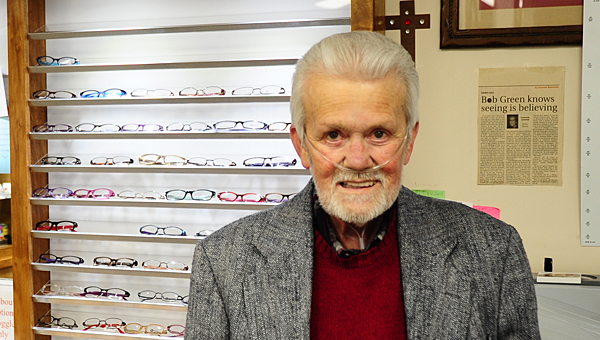 ALABASTER – It simply wasn’t time for Alabaster optician Bob Green to leave the Earth yet.

Surrounded by family at his home the week before Thanksgiving, Green wasn’t expected to get out of his bed after suffering a severe heart attack.

“The doctor came to my house and saw what was going on with me. He told my wife and kids that I had 24, maybe 48 hours to live at that point,” Green, who has owned Bob Green’s Alabaster Optical on U.S. 31 for 38 years, said as he sat at his son’s desk at the business on Jan. 7. “If not for my family and prayer, I would not be here today.”

A few days after doctors predicted – for the fourth time in his life – he wouldn’t live through the day, Green, who is preparing to celebrate his 65th birthday, was greeting customers at his eye care business.

“He is a living, breathing miracle,” Green’s friend, former Alabaster Police Chief Stanley Oliver, said while recalling the incident in mid-December. “They thought he was going to die on that bed. It’s a miracle, there’s no other way to describe it.”

Green, who grew up “very poor” in the New Castle community in Jefferson County before going into the optical business at 16, was quick to turn the attention from himself when asked about surviving multiple near-death experiences.

Over the years, Green has had two open-heart surgeries, numerous heart attacks, fluid buildup on his brain, 18 heart stints, neck surgery, a four-wheeler wreck and a car wreck.

“I’ve pretty much had everything happen to me, and I’ve had the good fortune to smile about it now,” Green said. “But this has nothing to do with Bob Green. What God has done is used my body to show that he still performs miracles. I want people to know that.”

Today, Green uses an oxygen machine at all times, but still makes appearances at his Alabaster business nearly every morning. On Jan. 7, Green quickly offered to use “the right tools and a good pair of reading glasses” to fix a longtime customer’s bent glasses frame after the customer stopped in for a visit.

“My family has been told four times that I was going to die. Each time, the good Lord has blessed me with another day,” Green said. “I’ve still got something left to do for him.”

Asbury UMC cooks for a cause

The Asbury UMC Children’s Ministry is hosting the church’s first ever Chili Cook Off Fundraiser to raise money for Imagine... read more