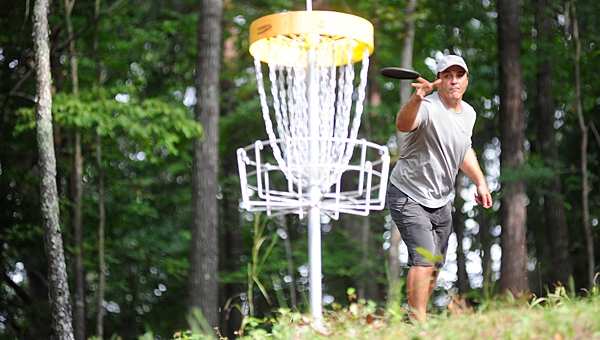 ALABASTER – Alabaster residents soon will have a chance to enjoy a new outdoor sport, as crews are working to build a disc golf course at Veterans Park off Alabama 119.

Over the past several months, the Alabaster Teen Council has worked with the Alabaster Sports and Entertainment Foundation to bring the project to fruition.

“The Teen Council wrote a proposal to ASEF seeking a grant for the project,” Alabaster Mayor Marty Handlon said during a Jan. 6 interview. “Their mission is to support sports and entertainment in Alabaster, so the disc golf course definitely fell into their mission.”

After accepting the Teen Council’s proposal, ASEF donated $5,000 to the $11,000 project, and the city government funded the remaining expense.

The Alabaster Parks and Recreation Department is doing much of the work on the 18-hole disc golf course in-house, and has already begun constructing it at Veterans Park, Handlon said. The course likely will be completed by the end of January, weather-permitting.

Once completed, Veterans Park will join a handful of other disc golf courses in the Birmingham area, including one in Inverness and another at Birmingham’s George Ward Park.

Through the sport, players use Frisbee-like discs of different weights in an attempt to reach chain-lined metal baskets – or “holes.” Similar to golf, disc golf players attempt to reach the hole in as few throws as possible.

“We had it professionally designed,” Handlon said, noting the city is planning a dedication ceremony at the park once the course is complete. “The baskets should come in any day now, and they will install them shortly after that.”