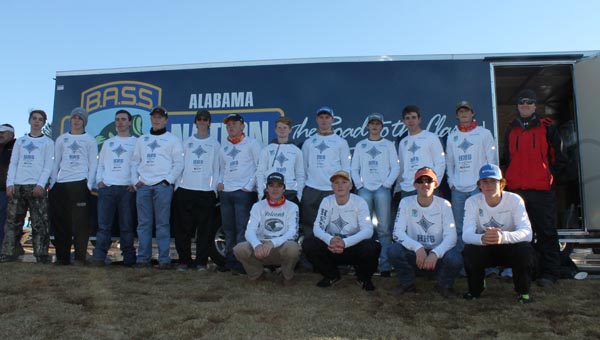 The Helena fishing team, shown here on their first day of a tournament in November, are in their inaugural year of competition. (Contributed)

HELENA- What happens when your school doesn’t offer the sport you enjoy?

If you’re Cade Holcomb, you get that problem taken care of.

This is the genesis story of the Helena High School fishing club. Holcomb, a freshman at HHS, has always been an avid angler, and wanted the opportunity to compete at the high school level when he entered the ninth grade. A modest student, he will not take the lion’s share of the credit for helping the program get off the ground.

“Really, my mom is responsible for getting the team started,” relayed Holcomb. “I love fishing and wanted to see what we could do about getting a team started, but couldn’t do it by myself. Every club has to have a sponsor to be recognized by the school, and she’s ours. Without her we wouldn’t have the team, probably.”

Holcomb’s mother, Genet, is an assistant principle at the Intermediate School in Helena, and also played a role in helping the team find their coach.

“She’s good friends with the mom of our coach. They put us in contact and we went and fished in the Mark’s Outdoors tournament together this summer,” Holcomb said.

Daniel Statum, a former member of the University of Alabama fishing team, is the coach of the team and believes it is the start of something special.

“I was thoroughly impressed with how we did in our first tournament,” said Statum. “We had three teams qualify for state. For a lot of the guys, it was their first time fishing in a tournament, so that was very impressive. With so many guys being freshmen, I think the future is very bright for us.”

The team, which has 18 members currently, breaks into two person teams on tournament days to fish. With so many of the team members being freshman, they are excited to build on their early success.

“I think there were something like 35 schools at our first tournament total,” Holcomb said. “We finished third. So for us to be able to do so well was really great.”

The team meets once a month to discuss strategies, to continue learning from Statum about the sport and how to react in different conditions. Practice is left up to individual team members to complete on their own time.

Moving forward, the future looks bright for the fishermen from Helena, as they look to build on their early success and work toward competing in the State Championship in May.