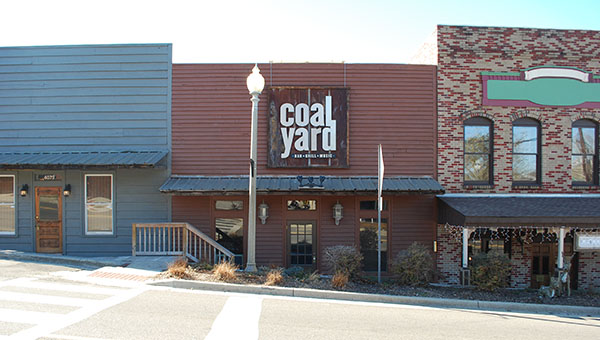 The Coal Yard Bar and Grill located in Old Town Helena will open at the end of January or first of February according to Owner Jeff Oetting. (Reporter Photo/Graham Brooks)

HELENA–Signs are going up, finishing touches are being completed and the grand opening of The Coal Yard Bar and Grill in Old Town Helena is just a few weeks away.

The entire project has taken more than two-and-a-half years because the historic building was basically gutted, brought up to code and renovated to get to where it is today.

Owner Jeff Oetting said the opening is less than a month away and talked about some of the unique features that went into building and designing the bar.

“Our target date for opening will be the end of January or first week of February,” said Oetting. “The theme for the bar is that we used to be a coal town. We have one of the original Helena coal cars, which we found in the woods. When we got it, all that was left of it was just a metal frame and the wheels so we found old wood and rebuilt it. It will be one of the centerpieces here.”

Taking a walk through the building, it is evident that countless hours of work have been put into getting the building ready and truly making it a one-of-a-kind spot for anyone seeking a fun place to spend an evening.

“Obviously everyone will be welcome, but our core demographic we were going after is probably 25 or 28 years old and up,” said Oetting. “It’s sort of an unserved demographic in this area. If you’re 21 or 22 there’s a lot of options but as far as options for the young professional, there’s not as many and that’s why we decided to do this.”

Aside from the coal car, the bar and grill features a back bar originally used in St. Louis in the late 1800s or early 1900s. When the great flood hit St. Louis in 1993, everything in the former bar was destroyed except the back bar. Oetting then found the back bar in a warehouse and placed it in his bar to be used.

Other features in Coal Yard include a stage for live music, two outdoor decks–one upstairs and one downstairs–an upper room with a smaller bar that can be used for private parties or events and other reused materials.

“The fun for me is the creative side of it and making space feel like part of something that has been frozen in time,” said Oetting. “When you walk in it’s like its been here forever. That’s why we’ve used as much reused materials as we could.”

From Staff Reports Local seniors ages 60 and older are being encouraged to apply for benefits that are being offered... read more