Kingwood Christian School basketball can compete with anyone 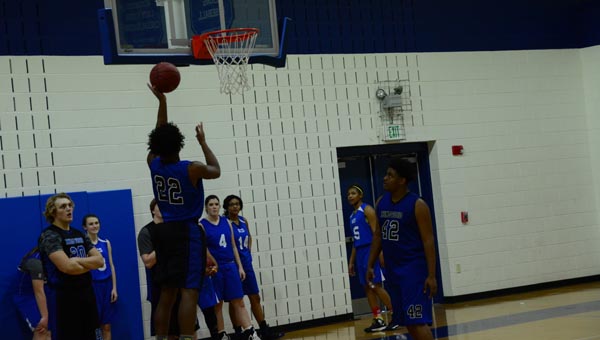 Alabaster- Kingwood Christian School, located between Alabaster and Pelham off of US 31, is the self-described “best kept secret in Shelby County,” according to Athletic Director Eddie Toles.

Kingwood, which was approved to be a participant in the Alabama Accountability Act as of the beginning of this school year, competes in the 3A class of AISA competition, according to basketball coach Danny Davis. The AISA, or Alabama Independent School Association, plays home to the independent school competition in the state of Alabama, as the name suggests. 3A is the highest class of competition within AISA.

“What we really want people to know,” said Davis, “is that the level of competition at Kingwood and in AISA is higher than people think.”

The boys’ basketball team currently stands at 13-2 under Davis and according to him three players, Reggie Mann, Justin Gibson, and Josef Ramson have already been offered scholarships to play at the college and junior college levels. Davis also coaches the girls’ team as well, and has seen two girls, Destiny Washington and Zarria Morgan, receive scholarship offers over the course of this season as well. EJ Manuel, another member of the boys basketball team, currently has several football offers and has interest from a number of other programs in basketball as well, according to Davis.

“There is a misconception that if kids come to Kingwood, or any AISA school really,” explained Davis, “that they might not get noticed (by colleges, for athletic scholarships).” Davis went on to articulate how, in a lot of cases, an independent school environment is actually a better place for kids to showcase their skills than a public school setting.

“If a kid is sitting on someone else’s bench, why not give him an opportunity to compete for playing time here?”

That is not to say Kingwood basketball is a step below the public schools in the area. The administration at Kingwood believes firmly in their basketball programs, not to mention all their other athletic programs, and believes they can compete with any team around. The scholarship offers already generated by their players is one sign that this is not a far-fetched thought.

Moving forward, the boys team will look to compete for a 3A state championship, while both programs will continue to build and compete.

By BAKER ELLIS / Sports Reporter In Alabama, the winter months have traditionally been reserved for mourning or celebrating the... read more