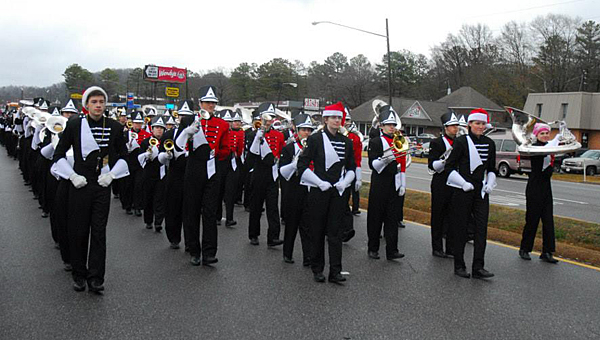 The Thompson High School Marching Southern Sounds are preparing to march in the governor’s inauguration parade in Montgomery on Jan. 19. (Reporter Photo/Neal Wagner)

For the second straight time, the band will march in the governor’s inauguration parade in the streets of Montgomery after the Marching Southern Sounds were nominated by a pair of local state legislators.

“You have to be nominated to participate in the parade, and we were nominated after Christmas by (state Sen.) Cam Ward and (state Rep.) Allen Farley,” THS Director of Bands Jon Bubbett said during a Jan. 7 phone interview.

Bubbett, who has been the THS band director for many years, said this will only be the second time he has taken a band to the governor’s inauguration parade, which will feature high school and university bands from across the state.

“It’s an honor to be nominated for this. We marched in it in 2011, but that’s the only other time I’ve been,” Bubbett said.

During the parade, the band will march in the streets surrounding the Alabama State Capitol building. While marching in front of the building, the band will pass a judging stand, which will rate the parade participants’ performances.

Bubbett said he learned the band will be marching in the parade only a few days ago, but said the band members are already working hard to prepare for the day. Most students in Shelby County will not attend school on Jan. 19 due to the Martin Luther King Jr. Day holiday.

“We are planning to play the Alabama state song with a little bit of America the Beautiful mixed in,” Bubbett said. “We will have two practices between now and then, and then we will be ready to go.”

While preparing to march in the parade, Bubbett said he will stress with his students what an honor it was to be selected for the event.

“I told the kids this is quite an honor,” Bubbett said. “They didn’t want any band, they wanted the THS band.”

The groundbreaking ceremony for the new Columbiana Senior Center has been set for Wednesday, Jan. 14 at 10 a.m., at... read more