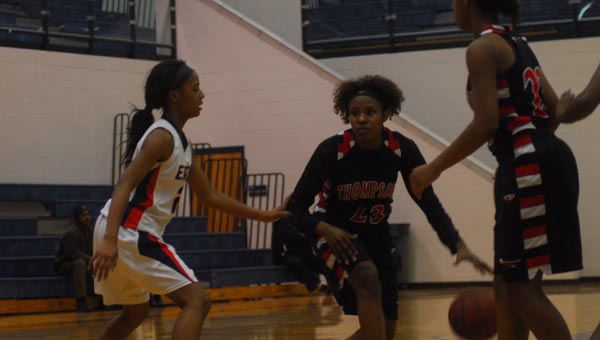 In a Friday night contest between the Thompson Lady Warriors and the Oak Mountain Lady Eagles, it was all Thompson all the way. The Lady Warriors shot very well from the field and forced countless bad shots and turnovers from Oak Mountain. The shooting may have been uncharacteristically efficient but the defense and strong rebounding put this game away early.

In the first quarter, scoring was kicked off by Jordan Lenoir, who scored from inside before promptly connecting from deep to make the score 5-0 in favor of Thompson very early. After the Lenoir 3, the Warriors began pressing and soon were leading 8-0 off of some early Oak Mountain turnovers. Kennedy Smith of Oak Mountain hit a triple to make the game 8-3, but that was about as close as the Lady Eagles would get on this night. A few more buckets by Myesa Pelton and Brittany Grice for Thompson and another three for Oak Mountain via Carmyn Greenwood made the score 12-6 in favor of Thompson after one.
The second quarter saw an early barrage of threes from Thompson by way of Miyel Miller and Indiah Cohil. By the time the score was 23-8 the Lady Warriors smelled blood and kept their foot on the gas, pressing and causing turnovers and getting easy buckets. The second quarter was a 21-5 run for Thompson, and the score was 33-11 at the half.

Solid backcourt play and sharpshooting from Cohill kept Oak Mountain at bay in the fourth. The Lady Eagles continued to fight, pressing late into the fourth quarter, but superior rebounding and pressure defense, on top of an exceptional shooting night never left this one in much doubt, as Thompson would go on to win 56-31.

Oak Mountain will turn their attention to their Jan. 13 contest at Tuscaloosa County.

By BAKER ELLIS / Sports Reporter In Alabama, the winter months have traditionally been reserved for mourning or celebrating the... read more