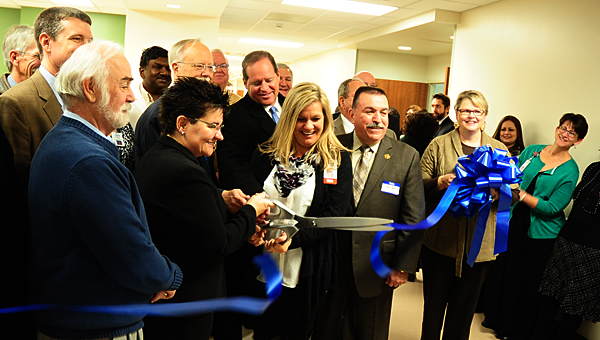 “This is huge. I don’t think people realize how big this is,” Fuhrmeister said during an interview after the ribbon cutting ceremony.

The new 20-bed unit on the fifth floor of the hospital’s South Tower will provide inpatient services to adults 19 and older who are affected by mental diseases such as schizophrenia, major depression and bipolar disorder.

It is the only unit of its kind in Shelby County, and will allow the county’s law enforcement to more easily get patients the help they need as quickly as possible, Fuhrmeister said.

Zelia Baugh, the former Alabama mental health commissioner, will serve as director of the facility, and said the unit will provide much-needed services to Shelby County’s growing population.

“People who have a mental illness don’t raise their hand in kindergarten and say ‘I want to have a mental disease.’ It’s a true disease,” Baugh said. “It’s an honor to be a part of this. This will help Shelby County and the surrounding counties so much.”

In addition to providing families of mentally ill adults easier access to services in the county, the new unit also will give the Shelby County Sheriff’s Office a new option in helping those with mental illnesses.

Currently, the Sheriff’s Office must work through the county’s probate court or the Chilton-Shelby Mental Health Center when dealing with a mentally ill adult who poses a danger to themselves or the community.

Once a county mental health officer is trained and appointed, they will be able to directly admit a patient to the psychiatric unit, possibly preventing the person from going to jail.

“They don’t need to be arrested if they legitimately have a psychiatric disease,” George said.

The Coal Yard Bar and Grill located in Old Town Helena will open at the end of January or first... read more