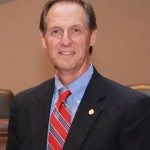 In the interview, Waters said Thomas’ retirement will be “effective March 1.”

This announcement came after the Pelham Police Department launched an internal investigation prompted by the Dec. 30 release of an audio recording that contained comments that have been deemed insensitive and offensive toward students who attend the Linda Nolen Learning Center in Pelham. The recording was made during an August shift-change meeting and involved eight Pelham police officers.

“I have the right to my opinion based on what I heard and what I heard was insulting and insensitive and it shouldn’t have been said,” Waters said to Murphy. “So the appropriate measures are being taken.”

Waters said that he has been dealing with behavioral and conduct issues from the Pelham Police Department in the last year.

“I’m not lopping off heads and I’m not on a witch hunt based solely upon the untoward comments that were made on that recording,” said Waters. “You hold your leadership accountable on all levels not just the top, not just the bottom, but the top and the bottom and that is what is being done.”

“In all of this, I disagree and I am saddened by Dustin Chandler’s resignation,” said Waters. “And although I don’t agree with it, I truly understand why he did it and I respect him for the man that he is.

Waters said he is trying to “correct a culture” at the police department.

“I agree with Chief Thomas’ decision to retire,” said Waters. “In my world, the leader is responsible for everything his people do and fail to do.”

Waters said he was made aware of Thomas’ decision to resign through a memo that was sent out to inform Thomas’ staff of his decision.

“I applaud any public servant who accrues the time required to retire,” Waters said in a January 9 phone interview.“And in this case it is good for Chief Thomas and good for the city of Pelham.”

Deputy Chief Larry Palmer said that he will miss his friend and leader.

“I can’t think of a one-word descriptor to describe how I feel about him,” said Palmer. “I am tickled for him that he is going to get to enjoy a new chapter in his life. He has served long and hard and done a lot for the city of Pelham.”