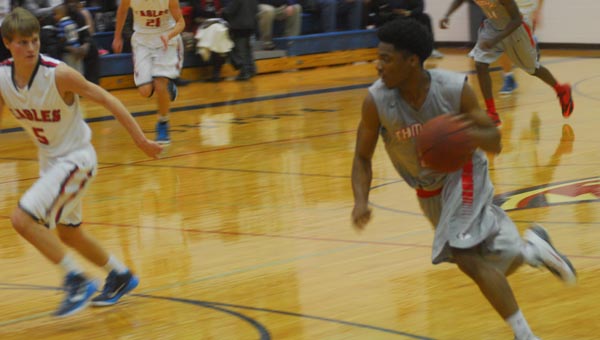 In a game that was part of a statewide project called Shoot 2 Change, which is designed to help raise awareness and support for autism across the state, the Thompson Warriors came to Oak Mountain to square off against the Eagles in a sharpshooting matchup.

This game proved to be a matchup of two efficient offenses battling it out from behind the arc for most of the night. Yeadon Patrick of Oak Mountain opened the scoring for the evening with a triple before Thompson responded with two quick buckets to take an early 4-3 lead. Thompson was in a full court man-to-man defense for much of the game, which gave the Eagles’ fits at times. Rashad Strother of Thompson and Will Stephenson for Oak Mountain traded three’s midway through the first quarter, and soon the score stood deadlocked at 11-11 apiece. Thompson then went on an 11-0 run to close the quarter to make the score 22-11 behind three’s from Strother, Reggie Chambers, and Demonte Caffey.

The second quarter saw two more three pointers from Strother, who had four in the first half, and big offensive rebounds for Thompson via Michael Freeman. Patrick and Payton Youngblood did what they could to keep the offense flowing for Oak Mountain, but behind nine first half three pointers for Thompson, the Warriors led at the break 36-24.

The Eagles came out very strong to start the second half, behind six quick points from Youngblood and another two from Gabe Haynes to make the score 36-32. Thompson had significantly cooled off from deep, and the Eagles home crowd could sense a comeback. However, the Warriors began to attack the rim more as the third quarter wore on. With the score standing at 39-34 Thompson, the Warriors went on a backbreaking 7-0 run to end the quarter up 46-34, and Oak Mountain could not dig out of a 12-point hole in one quarter.

Not for lack of effort on Oak Mountain’s part, however. They pressed Thompson all over the floor in the fourth, and Youngblood, Patrick, and Sy Young came up big for the Eagles on both sides of the floor. But Strother and Thompson would be too much in the end, as Strother finished with a game-high 27 points and the Warriors left with a well-earned 62-57 win.

Oak Mountain will play Tuscaloosa County next on Jan. 13.

Thompson will turn their attention towards a Jan. 13 showdown with Hoover.