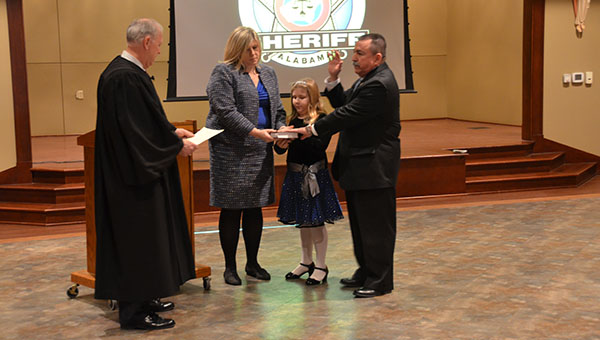 With family by his side, John Samaniego is sworn in as Shelby County’s 53rd Sheriff by Circuit Judge Dan Reeves on Saturday, Jan 10. (Reporter Photo/Graham Brooks)

INDIAN SPRINGS VILLAGE–Emotions were running high for John Samaniego as he moved from Sheriff-Elect to Shelby County Sheriff at his swearing in ceremony on Saturday, Jan 10., at 1:30 p.m. at Our Lady of the Valley Catholic Church.

Hundreds of family, friends and deputies of the Shelby County Sheriff’s Office came to honor the inauguration of Samaniego as the new sheriff.

“My opinion of being Sheriff is that the Sheriff belongs to the people and I’ve learned this from Sheriff Chris Curry,” Samaniego said in his speech after being sworn in. “The Sheriff is not elected by them, but he’s expected to be there when they need it and I hope to be there for each and every one of you.”

Sheriff Curry spoke about the dedication and hard work Samaniego has shown through the years to get to where he is now.

“John has been a man of integrity, a man of commitment, a man of intelligence, a man of excellence and he has done service,” said Curry. “He’s been a friend of mine for over 20 years and my right hand man for 12. People have said ‘John you have big shoes to fill’ and I said not really because we’ve been walking in the same pair for the last 12 years.”

Samaniego thanked everyone for their hard work during his campaign including family, friends and anyone he’s come in contact with to help him along the way.

“I want to first say thank you,” Samaniego said while fighting through emotion after being sworn in. “My mother taught me how to love and have compassion for my fellow man. My father taught me duty to my country and state and to accept responsibility when it’s handed to me and to do the best job I can and to do the right thing.”

After Samaniego was sworn in as the 53rd Shelby County Sheriff, all sworn Sheriff’s Office deputies reaffirmed their oath with Samaniego as they prepare to begin a new era.