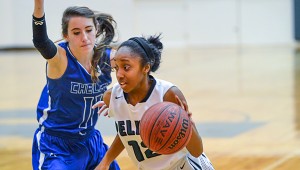 The Panthers won the tipoff and Pelham’s Jordan Allison laid the ball up for an immediate 2 points. Senior Erykah Hall was then fouled and scored one free throw followed by another foul and another 2 points.

Eanjle Browder followed the successful free throws with a 2-point-shot for the Panthers.

Hall then made two consecutive baskets bringing the score to 11-0 with Pelham in the lead.

W. Thorpe for the Hornets scored a three-point-shot to put Chelsea on the board with 1:05 left in the first quarter.

Shelby Cost, 15, for the Panthers answered the Hornets three points with a three point shot of her own ending the first quarter with a score of 14-3 with Pelham in the lead.

In the second quarter, Cost made another three-point-shot for the Panthers. Hall scored 9 of the 17 more points gained by the panthers before the half. The first half of the game ended with Pelham in the lead 31-9.

The Hornets scored 13 points in the fourth quarter but came up short in the end, with the final score being 60-33 with the Panthers on top.

Pelham’s Erykah Hall was the leading scorer for the night with 19 points.

“It feels really good,” said Hall. “Our team has been working really hard to get this win.”

Coach Adam Brown was proud of his team after the game.

“It feels good, we finally put a whole game together,” said Brown. “We shot it well, we defended it well, the pressure worked really well and all around just played a good game.”

The Panthers take on the John Carol Cavaliers at home this Friday, Jan. 9.