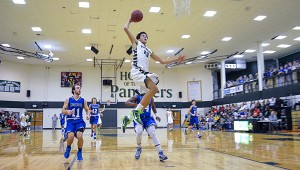 On Thursday night, Jan. 8, the Pelham High School Boys basketball team took on the Chelsea Hornets in what turned out to be a close game.

The game got off to a slow start with no baskets made in the first two possessions, until Joseph Lanzi shot a successful three-pointer for Chelsea scoring the first points of the game.

Lanzi then made a layup bringing the score 5-0 in favor of Chelsea.

Pelham’s Moregan Sharp was then fouled and made one of two free throws, putting Pelham on the board and bringing the score to 5-1 Chelsea.

The Panthers then went on a run of successful offensive plays bringing the score to 7-7. Pelham sophomore Alex Reese laid up the ball putting the Panthers in the lead 9-7.

At the end of the first quarter the Panthers led in a tight 11-10.

The second quarter was all about the Panthers; the team had a series of impressive plays and scored 14 points in all. Zach Allison and Alex Reese made the crowd favorite when Allison passed the ball mid-air to the 6’9 Reese for a dunk keeping the Panthers in the lead. The score was 25-19 Pelham at the half.

In the third quarter the Hornets were determined to make a comeback and both teams were shooting well. Pelham’s Allison and Reese put up another dunk and the third quarter ended with the Panthers on top 43-30.

The Hornets were fighting even harder in the fourth quarter to close the gap.

Chelsea’s Foster successfully shot and was fouled. Foster then made both free throws bringing the score to 43-34 Pelham with 5:50 left in the game.

Chelsea’s Lanzi, with 3:52 left in the game, scored bringing the score to 45-38 with Pelham still in the lead.

With 37 seconds left in the game Chelsea’s Lanzi was fouled and made both free throws bring the score to 51-49 Pelham.

From Staff Reports Local seniors ages 60 and older are being encouraged to apply for benefits that are being offered... read more