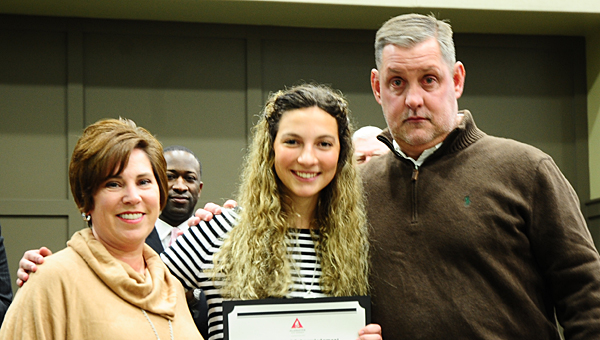 Today, she has a much better grasp of American culture, as Alabaster’s Morris family has hosted the 17-year-old high school student through an exchange student program.

“We celebrated Thanksgiving, then Christmas. She’s gotten to travel a lot with us and see other parts of the country,” said Joseph Morris, Alice’s host father through the exchange program. “Basically, she has been a part of the family.”

For Zanotti, the differences between her home country of Italy and Alabama were immediately apparent when locals began saying her name, which is pronounced “ah-lee-chay.”

“I’m used to it now. Everyone just says Alice,” Zanotti said, pronouncing her first name in the typical English fashion.

Zanotti came to Alabaster at the beginning of the 2014-2015 school year and enrolled as a student at Thompson High School. After “things just didn’t work out” with her original host family, Morris said he and his wife were happy to take Zanotti into their home.

“She and my daughter had become good friends, so we were happy to take her into our home,” Morris said, noting Zanotti will return to Italy in June.

Since coming to Alabama, Zanotti has had many new experiences, including trying out for and making the THS softball team. Because softball is not widespread in Italy, Zanotti had never played the sport before coming to Thompson.

“I just worked hard and tried my best,” Zanotti said, noting she also was involved in cross country track and was on the 2014 homecoming court at the school. “We are mostly doing conditioning right now.”

By far, Zanotti’s most memorable experience in America so far has been shopping on Black Friday.

After visiting some of the Morris family in Georgia for Thanksgiving, the family left for Alabama at about 10 p.m. and went straight to the stores when they arrived home at about midnight.

“We went to Academy in Hoover, and (we saw) all the people outside waiting,” a wide-eyed Zanotti said as she recalled the experience. “It was crazy.”