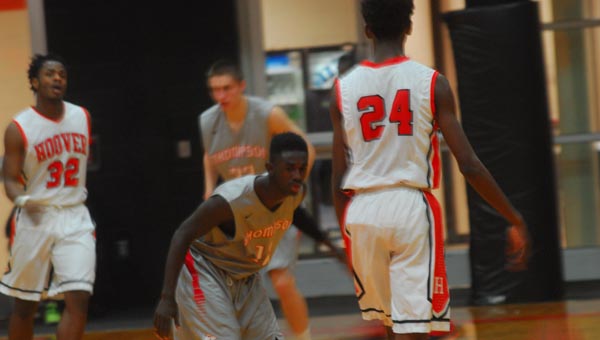 HOOVER- In a hard-fought, chippy contest that saw two players get ejected in the final second of the game, Hoover prevailed over the visiting Thompson Warriors by a score of 63-55.

There was no love lost between these two schools on this night, as a foul-heavy game told most of the story.

Hoover jumped on the Warriors early behind strong play from Dylan Smith and Leonard Wood, who combined for 12 of Hoover’s 20 first quarter points. Demonte Caffey kept Thompson around early, connecting twice from deep in the first quarter to score six of Thompson’s first quarter total of nine points.

Caffey added three more triples in the second quarter, giving him 15 for the half, which would also mark the end of his scoring on this night. Thompson rode Caffey’s hot hand, alongside strong interior play from Michael Freeman to bring them within seven at the half, as they trailed 31-24.

Smith picked up where he had left off in the first half, scoring the first two points of the second half for Hoover. Two more quick buckets both via Austin Cherry gave the Buccaneers what appeared to be a comfortable lead, before Thompson began to get to the rim more efficiently. The Warriors used a 13-0 run to take a 39-37 lead midway through the third quarter, and then things began to get heated.

The closing three minutes of the third quarter were prolonged due to the amount of fouls called on both teams. Thompson entered the bonus first, however they were followed quickly by Hoover, as neither team could seem to keep their hands off the other. Freeman was able to score on a nifty post move as time ran out in the third to give Thompson a 45-43 lead after a tense third period.

Hoover used a 9-0 run to start the fourth quarter that broke the back of Thompson, as they were never able to pull closer than three points the rest of the way. Rashad Strother, Thompson’s point guard and floor general, fouled out in the fourth which did not help the Warriors chances. Freeman was in and out as well after taking a nasty spill on the tail end of a foul as he went up for a tough inside bucket.

As the game began to near toward a close, and both teams were trading free throws, words were exchanged between some players. After two Hoover free throws made the game 63-55 with seven seconds left to play, Austin Cherry from Hoover and Will Laatsch from Thompson got into a scuffle that resulted in both players being ejected. It is unclear who instigated the skirmish, but both players were thrown out as a result.

“It’s a big time rivalry game, both teams played hard,” Coach Burkett said. “That at the end of the game was unfortunate, but it’s really no big deal. It happens in the heat of a tight game sometimes.”

Coach Patrick Davis of Thompson also felt the call was a small portion of the overall contest, saying that the call “was a minor part of the outcome.”

The result of an ejection, according to AHSAA.com, is a $300 fine, unless the player in question takes an online STAR Behavioral Mode within 10 school days of the date of ejection, in which case the fine is limited to $100 for a first time offense, however schools can appeal the ruling and have the ejections removed from the record, and in the process eliminate the fines.

Thompson falls to 13-8, and will face Tuscaloosa County on Jan. 16.

Thompson girls get ‘big, big win’ as they upset #2 Hoover

Jailyn Maddox of Hoover gathers herself before shooting a free throw while Thompson’s Janese Richardson looks on. Thompson was able... read more