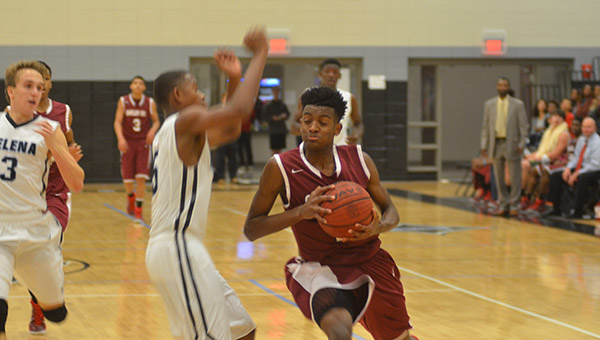 HELENA–This game really could be summed up into three short words: Fun to watch.

In a fast paced, down to the wire game, Shelby County was able to edge Helena 73-69 on Tuesday, Jan. 13 in a entertaining match-up that saw three players score more than 20 points in the game.

Jon Brown had a game-high 29 points and Justin Stuckey also added 20 for Helena. Brandon Green led Shelby County with 23 points in the game.

Shelby County controlled for most of the game by making runs and keeping the lead. However, Helena continued to hang around and a two-point shot made by Stuckey at the buzzer brought the score to 34-28 at halftime in favor of the Wildcats.

Where the game got interesting was the fourth quarter. The Wildcats took a 53-42 lead into the final quarter, but a couple of late turnovers by Shelby County and made three-pointers by Helena brought the Huskies to within four points of a tie at 70-66 with 21 seconds to play.

A made free throw by Shelby County with three seconds left put the Wildcats ahead for good, as they got the victory and will likely move into the top five of the state rankings.

Green came up big in the second half for Shelby County, scoring 19 of his 23 total points after halftime.

“We wanted to come out with a lot of energy tonight and pressure the basketball,” Shelby County coach Torry Brown said. “We tried pressing early and they handled it pretty good. We were fortunate tonight that when they did make a run we did make big shots and make a couple big foul shots.”

After the loss, Helena head coach Chris Laatsch was still very proud of his team’s effort.

“We just want our guys to compete for 32 minutes and I was proud of them for doing that,” said Laatsch. “We were down 7 with a minute to go, so it would’ve been easy to lay down, but they didn’t, they fought and we had a shot so I’m proud of that.”

Shelby County improved to 17-6 on the season and will look to build on their current no. 6 ranking in the state.

Lady Huskies turn up the pressure to defeat SCHS 49-29