Alabaster honors Teachers of the Year 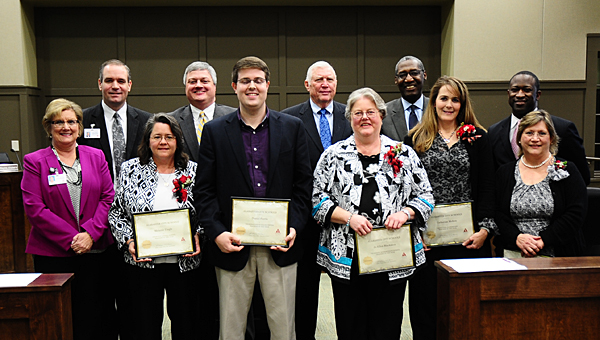 Alabaster Board of Education members honor the city’s Teachers of the Year during a Jan. 12 meeting at Alabaster City Hall. (Reporter Photo/Neal Wagner)

ALABASTER – Two Alabaster teachers will move on to the statewide Teacher of the Year competition and one will enter the Jacksonville State University Teaching Hall of Fame after they were among six named Teachers of the Year in the city school system.

Alabaster Superintendent Dr. Wayne Vickers honored the Alabaster City School System’s six teachers of the year during a Jan. 12 Board of Education meeting, thanking them for their service to the city’s children.

During the Jan. 12 School Board meeting, the six teachers each were awarded $100 to help purchase class supplies.

After they were named Teachers of the Year at their schools, two teachers were eligible to move on to the Alabama Department of Education’s statewide Teacher of the Year contest.

Hogue will move on to compete in the elementary division of the state’s contest and House will compete in the secondary division. Tingle also was named to the Jeff State Teaching Hall of Fame, and all three teachers received an additional $500 classroom stipend for their classrooms.