Montevallo men get back on track with win at Young Harris 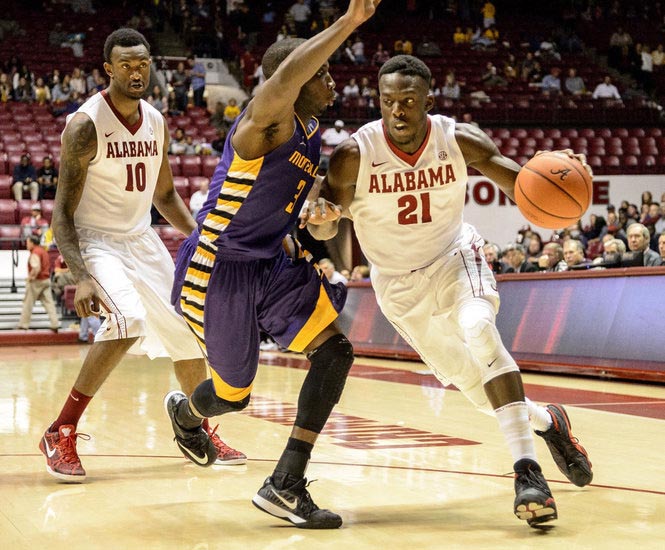 Monetvallo’s Skykeem Jackson, shown here in action against Alabama, recorded his first double-double of the year as the Falcons won on the road 69-57. (Contributed)

YOUNG HARRIS, Ga. – After a loss to UNC Pembroke snapped its five game winning streak, the University of Montevallo men’s basketball team got back into the win column on Wednesday night against Young Harris. The Falcons earned the road win, 69-57, and remained tied for the best conference record in the Peach Belt.

At the end of the first half, Montevallo held a seven-point lead over the Mountain Lions, 35-28.

UM shot 50% in the first half, led by Ryan May, who shot 75% from the field with a team-high eight points through 20 minutes.

To start off the second half, the Falcons were able to begin putting distance between themselves and the home team.

Montevallo opened the half on a 7-2 run, expanding the lead to double digits and solidifying their position on top. Montevallo never trailed in the second half and won by the final score of 69-57.

Points were spread out for UM, as nine different players scored.

After leading the Falcons in points in the first half, May continued his pace and was the overall scoring leading for the team. He finished with 13 points on 57.1% shooting

Depth and size aided in the Montevallo victory. The Falcons had 20 bench points compared to Young Harris’ 8.

The leading rebounder for the Falcons was senior guard Shykeem Jackson. The Crestview, Florida native recorded his first double-double of the year, grabbing a season-high 12 boards and scoring 10 points.

The Peach Belt Conference’s leading rebounder, senior Larry Slaughter, had eight rebounds and 11 points for UM, which were each the second most on the team.

Junior Malik Fields had 10 points on the night and also grabbed five rebounds from his forward position.

Off the bench, junior Bryant Orange shot 80%. He made his lone three-pointer and finished the game with nine points.

Despite foul trouble that limited his time on the floor, senior Troran Brown led the Falcons in assists. Brown is the Peach Belt Conference leader in assists.

Montevallo (10-7, 6-1) will return home in a battle of Peach Belt powers this Saturday, January 17. The Lander University Bearcats will come to Trustmark Arena for a 3:30 p.m. tip