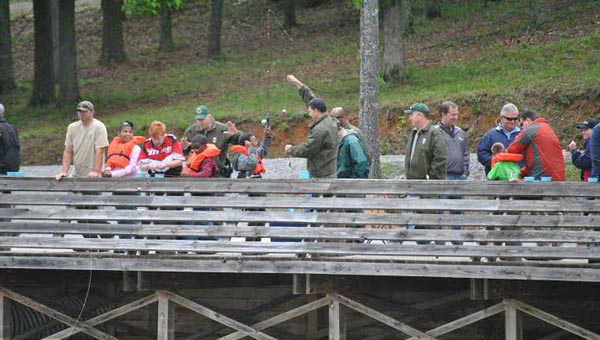 Children and volunteers are seen here enjoying Oak Mountain State Park’s Gone Fishin’ Not Just Wishin’ event last year. The event, which has continued to grow over the past 20 years, will be held from May 13-15 in 2015. (Contributed)

PELHAM- Driving through Oak Mountain State Park in January is a relaxing activity. When removed from the office or from home, the seemingly endless grey, winter days take on a peaceful, energizing energy in nature that doesn’t exist anywhere else. The quiet is almost palpable in the January haze.

Of course, the park is not always a serene, mystical temple to nature. As 2015 gets into full swing, Oak Mountain is looking forward to a jam-packed calendar over the next 12 months. In the immediate future, the Polar Plunge is taking place on Jan. 31, where the park is expecting more than 500 people to attend.

“All the money raised at the Polar Plunge will go towards the Special Olympics,” OMSP Assistant Superintendent Adam Sample said.

While the Polar Plunge is one of the more immediate events taking place at the park, there are other events later in the year that are going to draw large crowds as well, the biggest of those being a three-day event from May 13-15 called Gone Fishin’ Not Just Wishin’. Gone Fishin’ Not Just Wishin’ brings special-needs children from both Shelby and Jefferson counties to the park each day to fish, make crafts and play games on the beach.

“Every child has a volunteer accompany them,” Park Naturalist Emily Cook said. “Whether they need help casting or not, they are so excited and happy to be here. The smiles on their faces are great.”

According to Cook and Park Superintendent Kelly Ezell, the event last year brought between 700-800 kids over the three days, and both said it is one of the many events that make the park special.

Oak Mountain is also renowned in the mountain biking world for its mountain biking trails, with more than 30 miles of trail for all different levels of ability, according to Sample.

The park is also home to more than 50 miles of hiking trails, a year-round fishing lake where john boats can be rented, an area for horse riding and much more.

“There’s something for everyone here,” said Sample. “That’s what makes this place so great.”

Calera’s ShaKeith Tyes stands after being recognized for being a nominee for AHSAA Class 5A Back of the Year at... read more