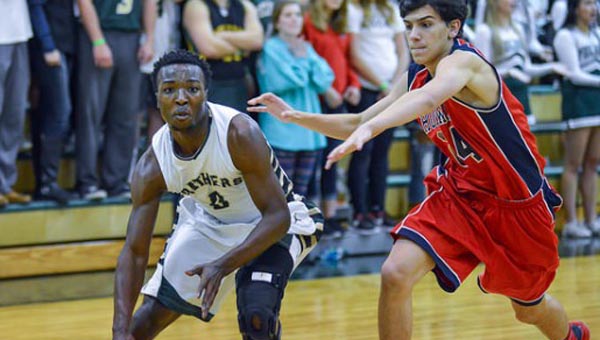 Moregan Sharp of Pelham drives to the basket around Oak Mountain’s Jackson Lovelady as Oak Mountain fell on the road 46-41. (Contributed)

“This was a hard fought battle between two terrific teams,” said Panthers head coach Joel Floyd. “Extremely proud of the boys sticking to the game plan the entire game. We came out and played hard and executed our offense the way we needed to.”

In the second quarter, a Mitchell Rottier 3-pointer put the Panthers ahead 13-11. An Alex Reese layup put the Panthers up 17-11 with 4:55 left in the quarter. Four Zach Allison free throws the last two minutes of the game put Pelham up 23-18 at the half.

In the second half the Panthers built a 31-23 advantage. Homewood cut the lead to 33-31, but a 3-pointer from Whitman at the third quarter buzzer put the Panthers up 36-31.